House Democrats plan a series of votes in the Judiciary Committee next week, and over the recess, Senator Bernie Sanders, a Vermont independent who is running for president as a Democrat, went to McConnell's hometown of Louisville, Kentucky, to call for a vote. 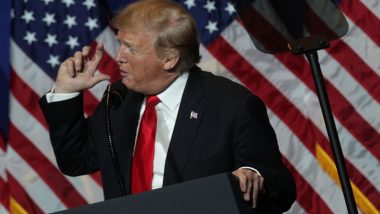 Washington, September 6: US President Donald Trump met a Democratic senator at the White House to discuss a policy response to mass shootings that have killed dozens of people over the past several weeks. The 30-minute private meeting on Thursday, which included several White House staffers, touched on a range of possible gun-related policy issues including background checks, Efe news reported. Senator Joe Manchin, a West Virginia Democrat who met Trump, and Republican Senator Pat Toomey have long urged legislation expanding background checks for gun sales. Their bill failed to pass the Senate in 2013.

"The President expressed interest in getting a result, so conversations will continue to see if there's a way to create a reasonable background check proposal, along with other ideas," a White House official said. But a person familiar with the meeting said the President didn't give Manchin a clear signal, illustrating the widespread uncertainty on Capitol Hill about what Trump might support. US President Donald Trump Turns Peshwa Bajirao and Dances to Ranveer Singh's Malhari Song and Netizens Can't Get Enough of This Viral Meme.

Manchin was already at the White House on Thursday for a Medal of Freedom ceremony honouring Los Angeles Lakers and West Virginia basketball great Jerry West. The gun-policy meeting occurred after the event. The President and his aides have discussed measures to improve background checks, empower law-enforcement officials to remove guns temporarily from people deemed dangerous, boost mental-health services and subject mass shooters to the death penalty, among other things.

Trump hasn't yet endorsed specific legislation, although White House officials have said they hope to move a package through Congress. Trump's position on guns is important because where he stands will determine whether Senate Majority Leader Mitch McConnell schedules a vote on gun legislation.

Earlier this week, McConnell told a radio show that he expected to hear from the Trump administration next week about what sort of gun legislation it was prepared to support, if any.

"If the president took a position on a bill so that we knew we would actually be making a law and not just having serial votes, I'd be happy to put it on the floor," McConnell said. Democrats have mounted a campaign to pressure McConnell to schedule a vote.

House Democrats plan a series of votes in the Judiciary Committee next week, and over the recess, Senator Bernie Sanders, a Vermont independent who is running for president as a Democrat, went to McConnell's hometown of Louisville, Kentucky, to call for a vote.

(The above story first appeared on LatestLY on Sep 06, 2019 08:54 AM IST. For more news and updates on politics, world, sports, entertainment and lifestyle, log on to our website latestly.com).