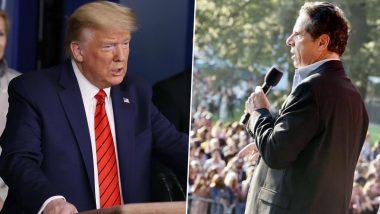 "He (Donald Trump) is persona non grata in New York City, and I think he knows that, and he'll never come back to New York, because New Yorkers will never forget how gratuitously mean he has been," Cuomo was quoted as saying. "He can’t have enough bodyguards to walk through New York City. Forget bodyguards, he'd better have an army if he thinks he’s going to walk down the streets in New York," the Governor added.

Cuomo, according to Politico, later clarified he was not threatening the President but rather expressing how disliked he believes Trump is by New Yorkers. His remarks had come after President Trump threatened to pull federal funding from cities that were unable to prevent the establishment of lawless zones. He asked the Justice Department to identify state and local jurisdictions that "have permitted violence and the destruction of property to persist". Donald Trump Met by Protesters, Supporters as He Tours Area Damaged by Kenosha Riots.

He has apparently targeted the cities of Portland, Seattle, Washington, DC and New York City, which witnessed rioting and looting amid demonstrations against racial injustice following the death of George Floyd in May. "My administration will do everything in its power to prevent weak mayors and lawless cities from taking federal dollars while they let anarchists harm people, burn buildings, and ruin lives and businesses,” Trump has tweeted.

(The above story first appeared on LatestLY on Sep 03, 2020 12:04 PM IST. For more news and updates on politics, world, sports, entertainment and lifestyle, log on to our website latestly.com).