Donald Trump Warns of ‘Overwhelming’ Retaliation to Any Iranian Attack 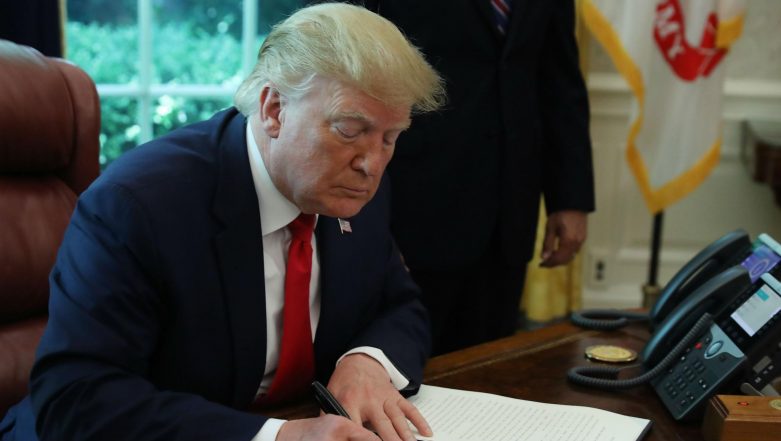 Washington, 25 June: President Donald Trump on Tuesday warned Iran that an attack on US interests would trigger an "overwhelming" response and could bring "obliteration." Amid rising tensions between Washington and Tehran, Trump tweeted: "Any attack by Iran on anything American will be met with great and overwhelming force. In some areas, overwhelming will mean obliteration."

....Iran’s very ignorant and insulting statement, put out today, only shows that they do not understand reality. Any attack by Iran on anything American will be met with great and overwhelming force. In some areas, overwhelming will mean obliteration. No more John Kerry & Obama!

Iran's leaders only understand "Strength and Power, and the USA is by far the most powerful Military Force in the world," Trump said in the series of tweets. The United States and Iran have been locked in an escalating war of words since last week's downing of a US surveillance drone. Iran says it was in its airspace, which Washington vehemently denies.

Trump pulled back from plans to retaliate with military strikes on Iranian targets, saying the response -- and the collateral damage -- would not be "proportionate."

But on Monday, he slapped a fresh round of tough sanctions on Iran, including on its supreme leader Ayatollah Ali Khamenei and top military chiefs. Tehran said the window for diplomacy was shut. Iranians Mock US President Donald Trump for Mistaking Leader with Dead Founder.

Iran also said it would abandon more commitments made under a 2015 nuclear deal signed with world powers. The United States withdrew from that deal last year. Trump called their new statements "very ignorant and insulting."

Iran leadership doesn’t understand the words “nice” or “compassion,” they never have. Sadly, the thing they do understand is Strength and Power, and the USA is by far the most powerful Military Force in the world, with 1.5 Trillion Dollars invested over the last two years alone..

"The wonderful Iranian people are suffering, and for no reason at all. Their leadership spends all of its money on Terror, and little on anything else." Iran and the US broke off diplomatic relations in 1980 over the hostage crisis at the US embassy in Tehran following Iran's Islamic revolution.