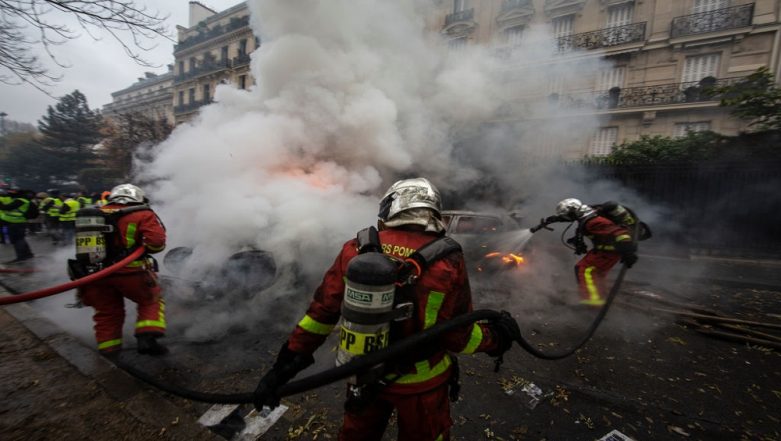 Paris, December 2: Panic has gripped France in wake of the unprecedented "yellow vests" movement -- directed against the hike in fuel taxes, inequality and poor living conditions for the working class. In order to contain the unrest, which has sprawled into the worst civil agitation in over a decade, the Emmanuel Macron government is considering to impose "emergency".

President Emmanuel Macron, who returned from the G20 summit in Buenos Aires last night, denounced the violent nature of the agitation, asserting that his government will not only crackdown on the anarchists, but hold the organisers accountable for the damage to public and private properties. Emmanuel Macron Slams Protesters After Violence Breaks Out in France for Rising Fuel Prices.

According to top Interior Ministry sources, cited by the local media, the government is considering to impose emergency due to unorganised nature of the protests.

What initially began as an agitation on November 17 by unions affiliated to various industrial sectors, has now turned into an anarchic unrest involving "extremists of the far-left and the far-right", along with thugs and criminals, said government spokesman Benjamin Griveaux on Sunday.

Interior Minister Christophe Castaner said the government would be left with no other option but to launch a brutal crackdown if the agitators do not come to negotiating table. "They must get organised and come to us. We are ready for talks. Only dialogue is a solution," he was quoted as saying.

Paul Marra, a prominent yellow vest activist in Marseille, told BFM TV that the protesters are now moving ahead with a single-agenda: resignation of President Emmanuel Macron. Putting the onus on the government for the violence, she said the things would had not gone out of control if the "state, which is the biggest thug", had not taken inhumane measures.

According to Europe 1 Radio, the number of agitators have now swelled to nearly 75,000. The numbers are expected to reach 100,000 within the next couple of days -- if the Macron regime fails to take concrete action.