Hindu Sindh Foundation Inc. (HSF) is presenting a comprehensive programme for saving the Hindu girls in Pakistan, to potential patrons, guardians and supporters in the diaspora. 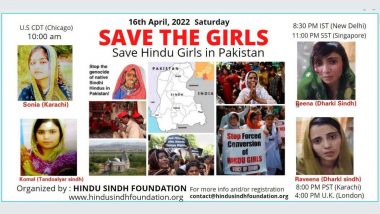 New Delhi, April 13: Hindu Sindh Foundation Inc. (HSF) is presenting a comprehensive programme for saving the Hindu girls in Pakistan, to potential patrons, guardians and supporters in the diaspora. The programme envisages relief and assistance both short and long term.

The latest case is that of Pooja Kumari, age 18, who was killed recently after she resisted abduction for forced marriage and conversion. HSF said Hindus of Sindh are living in mortal fear, especially those who are rearing young daughters. Immediate relief and assistance is required to alleviate the suffering of Hindus of Sindh.

It includes rescue of girls who have been threatened by the Muslim men and in all probability it would be a matter of time before they are abducted, forcibly converted and married off, HSF said. Hindu Girl, Pooja Oad 18-Year-Old Shot in Pakistan After Resisting Abduction.

The rescue programme includes but is not limited to by facilitating guardianship and patronship in the US, Canada, UK, Europe and Australia, as well as in India and Nepal, where the girls would emigrate for further studies.

The rescue programme also includes possible adoption of young girls after consent of birth parents and proper scrutiny of adopters and their meeting the eligibility criteria as provisioned by law in their home countries, option for "limited adoption" (supervised guardianship without full adoption) would also be available.

(The above story first appeared on LatestLY on Apr 13, 2022 04:56 PM IST. For more news and updates on politics, world, sports, entertainment and lifestyle, log on to our website latestly.com).