The incident happened at around 5.40 am when the domestic worker was doing laundry. Gayathri slapped the maid twice on her left ear and once on her right. As a result, the maid said she could not hear anything in her left ear for the whole day. 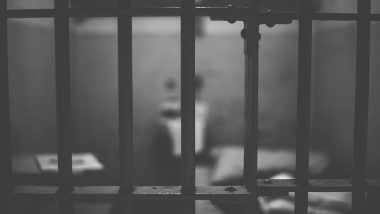 Singapore, April 14: A 51-year-old Indian-origin woman, a former counsellor at Singapore's Changi Prison, was sentenced to seven months' jail on Wednesday for abusing her maid, including slapping her so hard that she suffered a temporary loss of hearing, according to a media report.

Gayathri Iyer was convicted in February following a trial of two counts of abusing her maid, Myanmar national Thang Khaw Lam, The Straits Times reported. But she is appealing against the sentence and is on bail for 15,000 Singapore dollars (Rs 8,43,158).

The 30-year-old victim suffered hearing loss in her left ear for at least a month. She later recovered from her injuries and was found to have normal hearing. The maid started working for Gayathri's family in June 2017 at a posh condominium. Indian-origin Truck Driver Jailed for 22 Years Over Deaths of Four Australian Police Officers.

On October 27 that year, the housewife hit the maid's shoulder after the domestic worker used the word "mah" when talking to her. Using a mobile phone, Thang Khaw Lam took photographs of the bruises, which were at the top of her shoulder and extended slightly to her back. The second incident happened on December 7 that year, when Gayathri slapped her for failing to wake up her son who was then serving national service.

The incident happened at around 5.40 am when the domestic worker was doing laundry. Gayathri slapped the maid twice on her left ear and once on her right. As a result, the maid said she could not hear anything in her left ear for the whole day.

About five days after the incident, she ran from Gayathri's home and told the police about her ordeal. She recovered from her injuries by September 5, 2018. District Judge Tan Jen Tse acquitted Gayathri of two other assault charges involving the maid, finding the domestic worker's evidence in these instances not "unusually convincing".

On Wednesday, Deputy Public Prosecutor Tan Ee Kuan urged the court to jail the former prison counsellor for nine months, saying there was an oppressive relationship between the maid and her employer.

Gayathri's lawyer Kalidass Murugaiyan asked the court for a sentence of nine weeks, saying his client used to be a prison counsellor and had pledged to donate all of her organs despite being a Hindu.

The district judge, in sentencing Gayathri to seven months' jail, said the prosecution had not proven beyond reasonable doubt that there was a sustained pattern of abuse, and he was not able to find that the victim had suffered psychological harm.