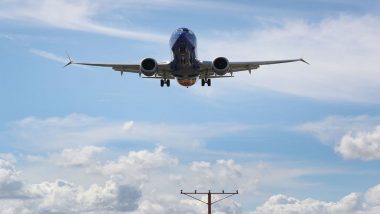 Tehran, January 8: A Ukrainian passenger plane carrying 170 people crashed in Iran in the early hours of Wednesday. The air accident, which left all passengers and crew members onboard dead, was reported shortly after the Iranian regime launched devastating airstrikes against two US military bases in western Iraq. US Aircraft Restricted from Flying Over Iraq, Iran, Persian Gulf as Tensions Escalate With Tehran.

The Ukrainian aircraft, said to be a Boeing 737, was reported to have crashed in Iranian capital Tehran. As per the preliminary reports, the plane went down near the Imam Khomeini International Airport after developing a technical snag.

The airliner, said to be a Boeing 737, went down near Tehran Imam Khomeini International Airport - local media https://t.co/5F3REAYWMe

Shortly before the accident was reported, the United States announced that all state and commercial aircrafts operated from the US would not be flying over Iraq, Iran and other parts of the Persian Gulf. A similar announcement is expected to be emulated by the close allies of the US in the West, who are likely to back the Donald Trump regime in its clash against Iran.

In the missile strikes by Iran in the wee hours of Wednesday, massive damage to lives and properties is suspected. The US Defence Department, in its statement, said the casualties and damages are currently being assessed. Following the attack, Iranian Foreign Minister Javad Zarif issued a statement claiming that the country is not in favour of a war of military escalation, but acted only in "self-defence" against the US.

(The above story first appeared on LatestLY on Jan 08, 2020 09:21 AM IST. For more news and updates on politics, world, sports, entertainment and lifestyle, log on to our website latestly.com).