Brazilian President Jair Bolsonaro confirmed that he has once again tested positive for the novel coronavirus, roughly a week after he contracted the virus. 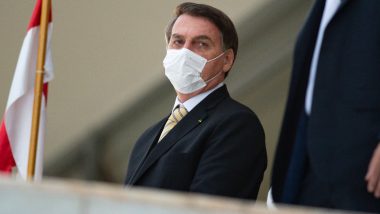 Brasilia, July 16: Brazilian President Jair Bolsonaro confirmed that he has once again tested positive for the novel coronavirus, roughly a week after he contracted the virus.

"We hope that in the next few days, they will give me a new test and, everything will be fine so that we can return to normal activity," Xinhua news agency quoted the President as saying in a live Facebook broadcast on Wednesday. Coronavirus Infects Brazil President Jair Bolsonaro, Test Report Shows 'Positive' For COVID-19: Local Media.

Bolsonaro, who repeatedly played down the risks posed by the virus which he termed "a little flu" and asserting that he would not be seriously affected by it, said he would get tested again in a few days.

In a statement, the communication secretariat of the presidency said that Bolsonaro was currently staying at the Alvorada Palace in Brasilia, "and continues to be accompanied by the medical team".

According to the statement, the latest test was carried out on Tuesday morning and the result came out at night.

On July 7, Bolsonaro announced that after developing a fever and general discomfort, he tested positive for COVID-19 at the Brazilian Armed Forces Hospital.

Bolsonaro is 65 years old, making him part of an age group experts consider to be at high risk for developing complications from the disease.

Brazil currently accounts for the second highest number of COVID-19 cases and deaths in the world at 1,966,748 and 75,366, respectively, according to the Johns Hopkins University.

Despite the rising numbers, Bolsonaro has argued that regional lockdowns werehaving a more damaging effect than the virus itself, and accused the media of spreading panic and paranoia.

(The above story first appeared on LatestLY on Jul 16, 2020 11:01 AM IST. For more news and updates on politics, world, sports, entertainment and lifestyle, log on to our website latestly.com).