Many land areas are expected to see above average temperatures, with the only large exceptions being north-western North America, the Indian subcontinent, the Indochinese peninsula, and Australia. Even so, climate-sensitive sectors such as agriculture, health, water resources and disaster management will be affected, it said. 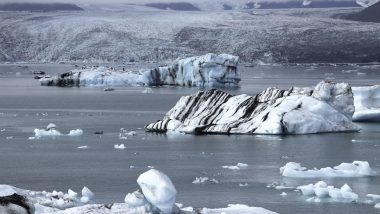 Geneva, November 30: Pointing out that La Nina has developed for the second consecutive year, influencing temperatures and precipitation and is expected to last into early 2022, the World Meteorological Organisation (WMO) on Tuesday said it will, however, not have a direct impact on climate change.

"Despite the cooling influence of this naturally occurring climate phenomenon, temperatures in many parts of the world are expected to be above average because of the accumulated heat trapped in the atmosphere as a result of record high levels of greenhouse gases," WMO said in a release.

Many land areas are expected to see above average temperatures, with the only large exceptions being north-western North America, the Indian subcontinent, the Indochinese peninsula, and Australia. Even so, climate-sensitive sectors such as agriculture, health, water resources and disaster management will be affected, it said. What is Climate Change? What Has IPCC Said in its Warning Report?.

"The cooling impact of the 2020/2021 La Nina - which is typically felt in the second half of the event - means that 2021 will be one of the tenth warmest years on record, rather than THE warmest year. This is a short-lived respite and does not reverse the long-term warming trend or reduce the urgency of climate action," said WMO Secretary General Professor Petteri Taalas.

La Nina refers to the large-scale cooling of the ocean surface temperatures in the central and eastern equatorial Pacific Ocean, coupled with changes in the tropical atmospheric circulation, namely winds, pressure and rainfall. It usually has the opposite effects on weather and climate as El Nino, which is the warm phase of the El Nino Southern Oscillation (ENSO).

This ENSO is the dominant driver of naturally occurring climate variability and also the main source of seasonal climate predictability. In a warmer world, the associated ENSO precipitation variability on regional scales is likely to intensify, according to the latest Assessment Report from the Intergovernmental Panel on Climate Change (AR6 WRI).

El Nino and La Nina are not the only factors and no two La Nina or El Nino events are the same. WMO therefore now issues a monthly Global Seasonal Climate Update (GSCU) to provide additional actionable information to decision-makers.

According to the latest WMO Update, there is a high chance (90 per cent) of tropical Pacific sea surface temperatures remaining at La Nina levels until the end of 2021, and a moderate chance (70-80 per cent) for them to persist at La Nina levels through the first quarter of 2022. This is based on forecasts from WMO Global Producing Centres of Long-Range Forecasts and expert interpretation.

(The above story first appeared on LatestLY on Nov 30, 2021 05:34 PM IST. For more news and updates on politics, world, sports, entertainment and lifestyle, log on to our website latestly.com).