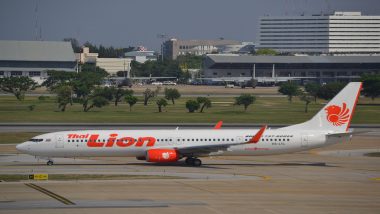 Jakarta, October 29: Lion Air Jet flight JT610 from Jakarta to Pangkal Pinang has crashed into the sea near Indonesia after takeoff, reported Straits Times. The Lion Air flight went missing just 13 minutes after taking off on Monday morning. The Indonesian authorities have started a search and rescue operation for the crashed plane and found the wreckage of the plane, though the number of causalities is not reported yet. The Lion Air Flight JT 610 took off from the Jakarta airport at 6:20 am (Local time) and lost contact with air station at 6:33 am.

The flight was originally scheduled to arrive at Pangkal Pinang airport at 7:20 am. A spokesman from Indonesia's search and rescue agency confirmed that the plane has been crashed. The plane was Boeing Co. 737 Max-8 Model. Indonesian transport ministry official confirmed that the crashed Lion Air flight was carrying 188 people including the crew members. More Information awaited. Philippines: Xiamen Airlines Boeing 737-800 Crash-Lands at Manila Airport, Narrow Escape For Passengers.

The last major accident reported in Indonesia was in December 2014 when AirAsia Airbus A320 aircraft crashed into the waters after taking off from Indonesia's Surabaya to Singapore with 162 people on Board.

(The above story first appeared on LatestLY on Oct 29, 2018 08:40 AM IST. For more news and updates on politics, world, sports, entertainment and lifestyle, log on to our website latestly.com).