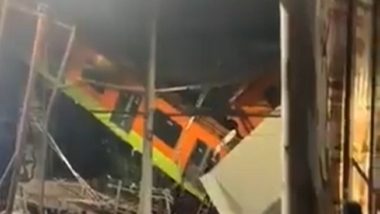 Mexico, May 4: An overpass carrying Mexico City's metro train cars partially collapsed onto a road on Monday night, killing more than a dozen people. Mexico City Mayor Claudia Sheinbaum said the accident left 20 people dead and scores injured. Many others were feared trapped inside the metro train. The overpass, which partially collapsed, was about 5 meters above the road in southern Mexico City. Mexico Marks End of Last Indigenous Revolt with Apology.

Following the accident, Mayor Claudia Sheinbaum visited the spot and assured complete support to the victim' families. She also wrote on Twitter that "firefighters, public safety personnel are working. Various hospitals attending". Here's what we know so far about the Mexico metro overpass accident.

A tragedy occurred, the metro on line 12 with the bridge in Mexico City fell, there are many injured and people trapped in the wagons, I hope their relatisituation.ot in that situation

In March of last year, a collision between two trains at the Tacubaya station left one passenger dead, injuring 41 people. In 2015, a train that did not stop on time crashed into another at the Oceania station, injuring 12 people.

(The above story first appeared on LatestLY on May 04, 2021 01:00 PM IST. For more news and updates on politics, world, sports, entertainment and lifestyle, log on to our website latestly.com).