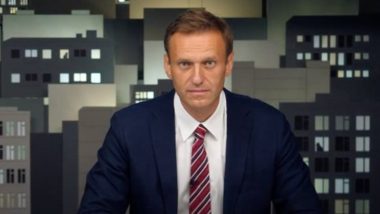 Moscow, May 10: The missing Russian doctor, who treated President Vladimir Putin's most prominent critic, Alexei Navalny, has been found alive. Alexander Murakhovsky, who is serving as Health Minister of the Siberian region of Omsk, had gone missing after leaving a hunting base in a forest on an all-terrain vehicle on May 7, state news agency TASS reported on Sunday, citing a police spokesman.

"The health minister of the Omsk region, Alexander Murakhovsky, came out (of the forest) to people in the area of the village of Basly. He is in good condition, currently undergoing examination at a hospital in the Bolsheukovsky district," Omsk's regional government was quoted by Sputnik News as saying. Who Is Alexei Navalny? Profile of 'Poisoned' Russian Opposition Leader Known For Fierce Criticism of Vladimir Putin.

Before his appointment as health minister in Omsk, Murakhovsky was working as chief physician at the Omsk Emergency Hospital No. 1, where Alexei Navalny was transferred after he fell ill aboard a Russian domestic flight in August 2020. Navalny was later flown out to Germany and treated for weeks at the Charite hospital in Berlin.

Tests run by several laboratories concluded that Navalny was poisoned with the nerve agent Novichok. However, Murakhovsky had not diagnosed a poisoning and said Navalny had fallen ill with a metabolic disorder. Navalny accused him of falsifying the diagnosis. The doctor was also accused of delaying Navalny's transfer to Germany at a critical time.

In November 2020, Murakhovsky was promoted to health minister of the Siberian region. Navalny had ridiculed the promotion of Murakhovsky to Omsk regional health minister, saying: "You lie, fake test results, are ready to please the bosses in any way - you get an award and a promotion."

(The above story first appeared on LatestLY on May 10, 2021 03:23 PM IST. For more news and updates on politics, world, sports, entertainment and lifestyle, log on to our website latestly.com).