Police use water cannon on anti-coup protesters in Myanmar. Thousands of people join anti-coup protests across Myanmar on Monday as workers go on a nationwide strike, demanding the release of ousted leader Aung San Suu Kyi and the return of democracy. 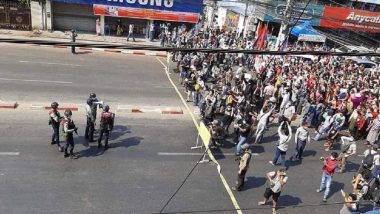 A key aide of ousted leader Aung San Suu Kyi was arrested on Friday. The arrest followed that of Suu Kyi and Myanmar President Win Myint who were detained on Monday as the military seized the levers of government. The coup granted army chief Min Aung Hlaing control of the country.

US President Joe Biden earlier this week threatened new sanctions on Myanmar after its military staged a coup and arrested the civilian leaders of its government, including Aung San Suu Kyi.

(The above story first appeared on LatestLY on Feb 08, 2021 11:19 AM IST. For more news and updates on politics, world, sports, entertainment and lifestyle, log on to our website latestly.com).