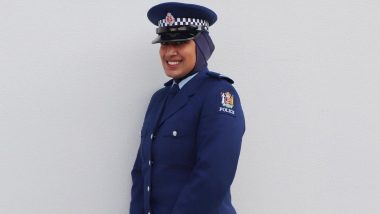 Wellington, November 19: The New Zealand Police has introduced Hijab as a part of its official uniform.  It is undertaken to encourage Muslim women to join the police force. New Zealand Police said the work to develop the Hijab for its uniform began in late 2018 in response to a request from police staff who visited secondary schools. Constable Zeena Ali, a new recruit, has become the first one to wear the Hijab with her official police uniform. South African Army Drops Charges Against Hijab-wearing Officer.

Zeena Ali was born in Fiji and moved to New Zealand as a child, the New Zealand Herald she decided to join the police after the Christchurch terror attack, where a white supremacist  attacked two mosque in New Zealand and killed over 50 Muslims. "I realised more Muslim women were needed in the police, to go and support people," she told the national daily."It feels great to be able to go out and show the New Zealand Police hijab as part of my uniform," she added. "I think that seeing it, more Muslim women will want to join as well," Constable Ali said. Women from Different Faiths Wear Hijab, Stage Sit-in at Jantar Mantar.

(The above story first appeared on LatestLY on Nov 19, 2020 09:50 AM IST. For more news and updates on politics, world, sports, entertainment and lifestyle, log on to our website latestly.com).