Earlier this week, Trump said a location for another meeting between the two would be announced in the not-too-distant-future. 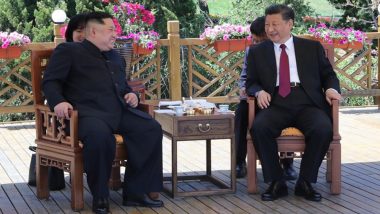 Pyongyang, January 8: North Korean leader Kim Jong-un is visiting China at the invitation of Chinese President Xi Jinping, North Korea's state media has confirmed. The news follows speculation earlier on Monday that Kim was possibly on his way to China by train. Kim will be in China from January 7-10 with his wife Ri Sol-ju, the BBC reported on Tuesday citing North Korean news agency KCNA.

It comes amid reports of negotiations for a second summit between Kim and US President Donald Trump. The two met last June in what was the first such meeting for a sitting US president. Kim's trip to China this week, on board his armoured train and accompanied by several other leading North Korean officials, will be his fourth visit to the country in less than a year. China is a key diplomatic ally of North Korea and one of the country's main sources of trade and aid. Kim Jong-un Makes Second Surprise Visit to China To Meet Xi Jinping.

Last year, Kim visited the country three times, paying his respects to Xi after not meeting him for more than six years following his rise to power. The latest three-day visit is likely to fuel speculation that a second US-North Korean summit will take place soon. China Confirms Kim Jong-un Is In Beijing On Surprise Visit.

Earlier this week, Trump said a location for another meeting between the two would be announced in the not-too-distant-future. Trump told reporters in Washington hat "a good dialogue" was taking place with North Korea, but that sanctions on Pyongyang would remain in place.

(The above story first appeared on LatestLY on Jan 08, 2019 09:27 AM IST. For more news and updates on politics, world, sports, entertainment and lifestyle, log on to our website latestly.com).