The Guardian Australia has released a photo allegedly showing Australian special forces soldier drinking beer using the prosthetic leg of a dead Taliban soldier as a vessel in Afghanistan. 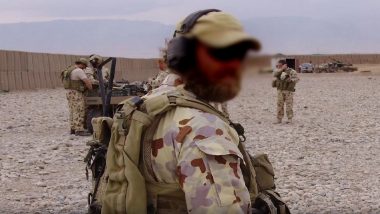 Canberra, December 1: The Guardian Australia has released a photo allegedly showing Australian special forces soldier drinking beer using the prosthetic leg of a dead Taliban soldier as a vessel in Afghanistan. The photo was clicked inside Fat Lady’s Arms, an unofficial pub set up inside Australia’s special forces base in Tarin Kowt in 2009. The soldier shown in the picture is still in the military, according to the newspaper. Chinese Official Shares Picture Allegedly Showing Australian Soldier Holding Knife to Throat of Afghan Child, Australia PM Scott Morrison Seeks Apology From China.

Another photo allegedly showing two Australian soldiers dancing with the leg was also released. The prosthetic leg reportedly belonged to a Taliban fighter who was killed during an assault on two compounds and a tunnel complex at Kakarak in Uruzgan in April 2009. The photos emerged weeks after the Australian government released the findings of a landmark four-year war crimes inquiry. Scotland Yard Probes Role of British Mercenaries in Fight Against LTTE.

#EXCLUSIVE: for the first time, @GuardianAus can reveal a picture of Australian soldiers drinking from the prosthetic leg of a dead Taliban fighter, confirming the practice took place in the Tarin Kowt special forces base in 2009 https://t.co/tX98rSyTSR

The investigation into alleged war crimes by soldiers of Australia found "credible evidence" that Australian soldiers murdered 39 prisoners and civilians in Afghanistan between 2005 and 2016. The inquiry also recommended criminal proceedings against the responsible soldiers. Army Chief Rick Burr confirmed that 13 soldiers who were "accessories" or "witnesses" of alleged murders served show-cause notices.

Last week,  Australian Prime Minister Scott Morrison had called for senior defence officers to be held accountable for war crimes allegedly committed by soldiers in Afghanistan. "In each case, it's important that not only is there accountability in the defence forces for individual alleged acts, but also in the chain of command about those who had responsibilities and accountabilities in that chain of command," Morrison had said.

(The above story first appeared on LatestLY on Dec 01, 2020 02:50 PM IST. For more news and updates on politics, world, sports, entertainment and lifestyle, log on to our website latestly.com).