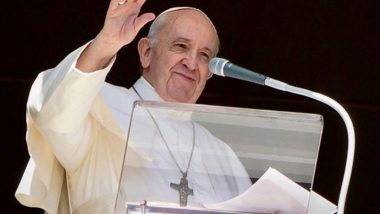 The documentary was released on Wednesday. “Homosexual people have the right to be in a family. They are children of God,” reported Associated Press quoting pope as saying. He added that civil union law so that same-sex civil unions could be legally covered. Pope Francis Says Pleasures of Eating Food and Sex Are 'Simply Divine' and 'Come from God'.

Juan Carlos Cruz, is the main character in the documentary. He is the Chilean survivor of clergy sexual abuse. In 2018, Francis initially discredited it during his visit to Chile. Cruz tells his own story in the documentary. George Floyd Death: Pope Francis Says 'We Cannot Tolerate or Turn a Blind Eye to Racism'.

Rev. James Martin, hailed the pope’s comment. He termed it as a major step. “The Pope’s speaking positively about civil unions also sends a strong message to places where the church has opposed such laws,” reported the news agency quoting Martin as saying. Notably, earlier Popes were not in favour of these same-sex civil union and were hostile towards LGBTQ issues.

(The above story first appeared on LatestLY on Oct 21, 2020 09:36 PM IST. For more news and updates on politics, world, sports, entertainment and lifestyle, log on to our website latestly.com).