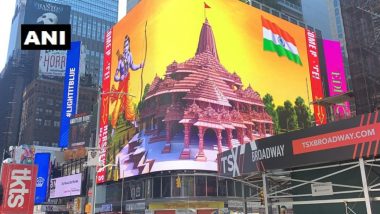 According to a video, uploaded by news agency ANI, a grand digital billboard of the proposed model of Ram Temple featured in the renowned Times Square of New York in the United States of America. Along with the proposed model of Ram Temple, Lord Ram's image on the left and Indian national flag was shown in the digital billboard. Ram Mandir Will Be a Modern Symbol of Our Traditions, Says PM Narendra Modi.

Here's the video of the digital billboard of Ram Temple:

Earlier in the day, PM Modi while addressing the people after the 'Bhumi Pujan' ceremony said, "Ram is everyone's... Ram resides in everyone. It is an emotional moment for India. A long wait ends today. A grand temple will now be built for Lord Ram who had been living under a tent for many years."

Apart from this, the Indian Premier also said that people from across the world will come here for darshan of Lord Ram and Janaki Mata. Adding more, he said that this temple will become a symbol of India's heritage and nation's unwavering faith. It will also become a symbol of the resolve of crores of people, PM Modi said.

(The above story first appeared on LatestLY on Aug 05, 2020 08:56 PM IST. For more news and updates on politics, world, sports, entertainment and lifestyle, log on to our website latestly.com).