As the invasion continues into its second month, Tirumurti said, "The situation in Ukraine has not shown any significant improvement since the Council last discussed the issue. The security situation has only deteriorated, as well as its humanitarian consequences." 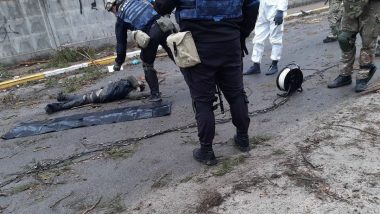 United Nations, April 5: In what is likely its strongest statement on the Ukraine situation so far, India on Tuesday "unequivocally condemned" the killings of civilians in Bucha after hearing Ukraine President Volodymyr Zelensky and UN officials giving heart-rending descriptions of the atrocities in the city.

"Recent reports of civilian killings in Bucha are deeply disturbing. We unequivocally condemn these killings and support the call for an independent investigation," India's Permanent Representative to the UN, T.S. Tirumurti, said at the Security Council. While making probably the harshest criticism of Moscow's invasion of Ukraine, Tirumurti straddled the fine line of neutrality by not naming Russia.

"India continues to remain deeply concerned at the worsening situation and reiterates its call for immediate cessation of violence and end to hostilities," he said. "We continue to emphasise to all member states of the UN that the global order is anchored on international law, UN Charter and respect for territorial integrity and sovereignty of states," he added in an implied criticism of Russia. Russian President Vladimir Putin Blames Global Food Insecurity on 'Mistakes' of Developed Countries.

Over the weekend, harrowing images of atrocities against civilians in Bucha dominated the Security Council meeting. Before Tirumurti spoke, Zelensky through a video link said that in Bucha, "there is not a single crime that they (Russia) would not commit" and listed a range of horrific atrocities that he said had been committed by the Russian troops that withdrew from the city near Kiev.

He likened the atrocities there to those committed by the Islamic State terrorist organisations in the Middle East. He showed the Council a video that he said documented what he called war crimes, showing piles of bodies, some with hands bound.

UN Secretary-General Antonio Guterres told the Security Council, "I will never forget the horrifying images of civilians killed in Bucha." "I am also deeply shocked by the personal testimony of rapes and sexual violence that are now emerging," he added, while calling for an independent inquiry into the matter.

Russia's Permanent Representative to UN< Vasily Nebenzia, asserted that some images in the video were staged and others showed victims of Ukrainian forces or "neo-Nazis" and questioned the timeline of the video and other images that have emerged.

UN Under-Secretary-General, Rosemary DiCarlo, said, "The horror deepened this past week as shocking images emerged of dead civilians, some with hands bound, lying on the streets of Bucha, the town near Kiev formerly held by Russian forces. Many bodies were also found in a mass grave in the same locality."

"Reports by non-governmental organisations and media also allege summary executions of civilians, rape and looting in Chernihiv, Kharkiv and Kiev regions," she added.

As the invasion continues into its second month, Tirumurti said, "The situation in Ukraine has not shown any significant improvement since the Council last discussed the issue. The security situation has only deteriorated, as well as its humanitarian consequences."

He added, "When innocent human lives are at stake, diplomacy must prevail as the only viable option. In this context, we take note of the ongoing efforts, including the meetings held recently between the concerned parties," he added. Russia-Ukraine War: US Lawmakers Want India to Restrict Sale of Russian-Origin Diamonds.

Representatives of Russia and Ukraine have held in-person meetings in Turkey and followed it up with virtual talks, but with no sign of a ceasefire yet. In addition, Guterres has designated Under-Secretary-General Martin Griffiths for a UN peace effort in Ukraine. He had visited Moscow over the weekend.

Tirumurti said that New Delhi hoped the international community would continue to support humanitarian efforts in Ukraine, adding, "We stand ready to provide more medical supplies to Ukraine in the coming days." India has already sent medicines and relief materials to Ukraine and its neighbours, he said.

(The above story first appeared on LatestLY on Apr 05, 2022 10:56 PM IST. For more news and updates on politics, world, sports, entertainment and lifestyle, log on to our website latestly.com).