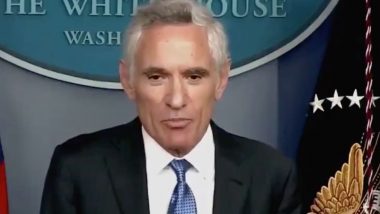 According to a Reuters report, the US infectious diseases expert, Anthony Fauci, while speaking to CNN on Monday said he was concerned that the information given by Atlas was “really taken either out of context or actually incorrect.” US Presidential Debate 2020: Five Issues on Top of Google Search Ahead of 1st Donald Trump-Joe Biden Clash.

Robert Redfield, director of the U.S. Centers for Disease Control and Prevention shared similar concerns. He was quoted saying, "Everything Atlas says is false." Scott Atlas, who joined the president's task force back in August. According to NBC Newyork report, before he joined as Trump's adviser, Atlas was a frequent guest on Fox News, where he pushed to reopen the country and his views aligned more closely with Trump's opinions during the health crisis.

(The above story first appeared on LatestLY on Sep 29, 2020 07:32 AM IST. For more news and updates on politics, world, sports, entertainment and lifestyle, log on to our website latestly.com).