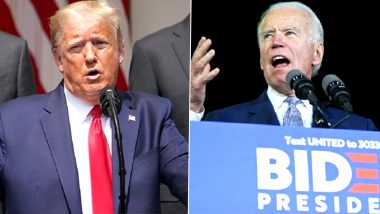 Washington, September 28: Netizens are looking forward to the first presidential elections debate between incumbent head of state Donald Trump and his Democratic Party challenger Joe Biden. The face-off, to be moderated by Fox News, will be broadcasted at 9 pm local time on Tuesday. Ahead of the debate, here are the top five issues dominating the Google search in the US. Know All About The Debate, Schedule And Where to Watch Live Streaming.

Unemployment: While the first three years of Trump presidency saw unemployment being minimised, the rate soared to the highest ever since the the Great Depression in the month of April. With lockdowns imposed across the nation, the rate of unemployment soared to 14.7 percent. Following the relaxations in subsequent months, the rate climbed down to 8.6 percent in mid-September -- still higher than the longtime average of around 5.7 percent.

Healthcare: The single-most important issue of former presidential aspirant Bernie Sanders' campaign - healthcare - is back in focus. This was the second most-searched issue on Google in America, after unemployment. The Democratic party has accused President Trump of leaving scores of households vulnerable by weakening the Obamacare programme.

Wages: The increase in per-hour wages, another issue being spearheaded by a section of the Democratic Party, is third most search issue in the US ahead of the presidential elections. Biden, in a bid to win over the support of his primary rival Sanders, adopted the latter's agenda by announcing in June that he supports $15 an hour as the federal minimum wage.

Crime: Experts believe that this could be an issue where Trump may succeed in cornering the Democrats, with him alleging that incidents of crime by unruly elements who infiltrated the recent racial justice demonstrations were reported largely in Democratic Party-governed states.

Supreme Court: The decision of Trump to nominate the successor of Justice Ruth Bader Ginsburg, despite she stating in her last wish to be replaced only after the presidential polls, is now the fifth most searched issue on Google. In the past week, it was the second most searched issue.

Unemployment, as per Google Trends, has remained the single-most searched issue ahead of the presidential elections throughout the past seven days. Healthcare, which was the fifth-most search topic, has now ascended to the second spot. The issue of wages and crime kept juggling between the second, third and fourth spot throughout the week.

(The above story first appeared on LatestLY on Sep 29, 2020 12:01 AM IST. For more news and updates on politics, world, sports, entertainment and lifestyle, log on to our website latestly.com).