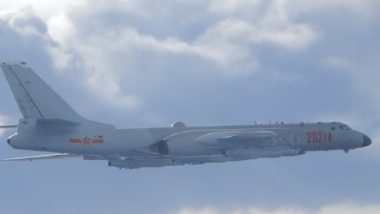 Taipei, September 18: Taiwan on Friday said it had to scramble fighter jets after 18 Chinese aircraft crossed the sensitive midline of the Taiwan Strait. The incident came on a day when a senior US official held talks with Taiwan's President Tsai Ing-wen in Taipei. China claims democratically-ruled Taiwan as its own territory. China denounced the meeting of US official and Taiwanese President, describing it as "collusion". Taiwan Seeks 'International Alliance' to Ward Off China Threat; A Timeline of The Historical Taipei-Beijing Divide.

Earlier today, China's defence ministry said it was conducting military exercises near the Taiwan Strait, adding that the drills were in response to the "current situation" and designed to safeguard China's "national sovereignty". The remarks came after US Undersecretary of State Keith Krach, the highest-level State Department official, landed in Taipei for a three-day visit.

The visit by Krach, who is undersecretary for economic growth, energy and the environment, follows a high-profile trip in August by the U.S. Health Secretary Alex Azar, the highest-level U.S. Cabinet official to visit since the U.S. switched formal relations from Taiwan to China in 1979. However, the U.S. has maintained unofficial ties with Taiwan since the official diplomatic break and is the island's most important ally and provider of defence equipment. (With agency inputs)

(The above story first appeared on LatestLY on Sep 18, 2020 04:11 PM IST. For more news and updates on politics, world, sports, entertainment and lifestyle, log on to our website latestly.com).