A day after the explosive revelation that U.S. President Donald Trump’s former lawyer Michael Cohen had recorded a conversation between them about a possible payout to former playboy model, Trump has condemned Cohen’s actions. 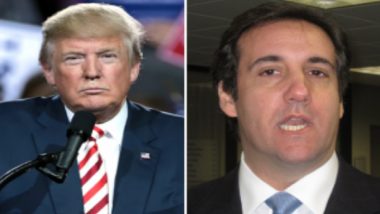 A day after the explosive revelation that U.S. President Donald Trump’s former lawyer Michael Cohen had recorded a conversation between them about a possible payout to former playboy model, Trump has condemned Cohen’s actions.

The tapes were reportedly recovered from Cohen’s home and office which were raided by the FBI in connection to an investigation about tax and bank fraud. The New York Times reports that in the recording, Trump and Cohen discuss paying Karen McDougal, who says she had an affair with Trump from 2006-2007.

The U.S. President today tweeted that such a raid was "almost unheard of". He added that a lawyer secretly recording a client was "totally unheard of and perhaps illegal". The president also insisted he had done nothing wrong.

Inconceivable that the government would break into a lawyer’s office (early in the morning) - almost unheard of. Even more inconceivable that a lawyer would tape a client - totally unheard of & perhaps illegal. The good news is that your favorite President did nothing wrong!

Cohen allegedly secretly recorded his conversation with Trump regarding a payout to McDougal two months before the 2016 elections that saw Trump become president.

Cohen recently changed his defence team which hints at a change in stance towards his former employer Donald Trump and his limited options due to the ongoing investigations. His lawyer Lanny Davis said in a brief statement on Friday that he was "sensitive" to the ongoing investigation but added: "Suffice it to say that when the recording is heard, it will not hurt Mr. Cohen. Any attempt at spin cannot change what is on the tape."

On Friday, Trump’s current personal lawyer, Rudy Giuliani, told the New York Times that the president and Cohen had discussed payments to Ms McDougal on the tape. But he said no money was actually ever transferred, and the recording itself amounted to "powerful exculpatory evidence".

He later told the New York Times that the two men had in fact spoken about paying the National Enquirer which had purchased the rights to Karen McDougal’s story, thereby repaying the tabloid the amount it had given to McDougal.

The fact that it has been leaked to the news media that there are tapes about the payouts to various women who alleged that they have had an affair with Donald Trump signals Cohen’s shift in stance towards his former boss, about whom he had earlier stated that he was willing to take a bullet for. This news also almost confirms that despite Trump’s repeated denials, it seems that the stories of his string of liaisons are a fact not fiction.

(The above story first appeared on LatestLY on Jul 21, 2018 08:23 PM IST. For more news and updates on politics, world, sports, entertainment and lifestyle, log on to our website latestly.com).