UK Prime Minister Boris Johnson-led Conservative Party will return to power after his party crossed a majority in the House of Commons after triumphing their 326th seat. The exit poll had indicated that Tories could win 368 seats, 74 more than other parties combined. 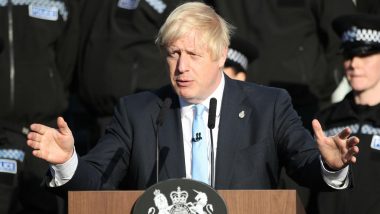 London, December 13: UK Prime Minister Boris Johnson-led Conservative Party will return to power after securing a majority in the House of Commons. The Conservatives have passed the 326 threshold with many seats still to declare. The exit poll had indicated that Tories could win 368 seats, 74 more than other parties combined. Johnson said that it would hive him "mandate to get Brexit done" and take the United Kingdom out of the European Union (EU) in January. UK General Elections Results 2019: Jeremy Corbyn Announces Resignation As Labour Party Leader Following Defeat to Boris Johnson’s Conservatives.

With counting complete in most of the districts, Conservatives crossed the majority mark of 326 seats. Johnson's projected victory will be the biggest for Conservative Party since Margaret Hilda Thatcher’s in 1987. This victory would give him more power to implement Brexit. UK General Elections Results 2019 Live News Updates.

The Conservatives have secured a majority in the House of Commons after winning their 326th seat: UK media #UKElections2019 https://t.co/sgX4sEt7DL

Addressing people after winning his seat in Uxbridge, Johnson said, "At this stage it does look as though this one-nation Conservative government has been given a powerful new mandate, to get Brexit done and not just to get Brexit done but to unite this country and to take it forward.”

The result for Conservatives is far better than many of them had hoped for. The majority will allow Johnson to make sure Brexit happen at the earliest. On the other hand, Labour Party Leader Jeremy Corbyn has made it clear that he will not "lead the party in any future general election campaign."

"I will discuss with our party to ensure there is a process now of reflection on this result and on the policies that the party will take going forward. I will lead the party during that period to ensure that the discussion takes place as we move on into the future," Corbyn said.

(The above story first appeared on LatestLY on Dec 13, 2019 11:22 AM IST. For more news and updates on politics, world, sports, entertainment and lifestyle, log on to our website latestly.com).