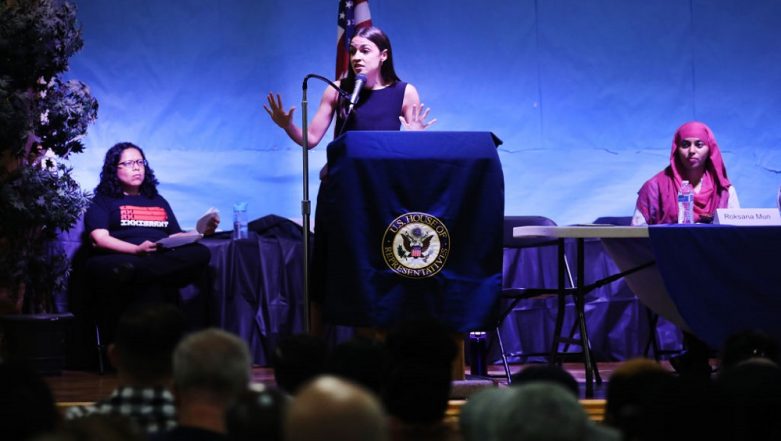 New York, July 22: A Louisiana police officer has threatened to shoot Democrat Alexandria Ocasio-Cortez, a New Yorker with Puerto Rican roots who is among four non-white Congresswomen US President Donald Trump wants to "leave" the country. In a Facebook post, the police officer in Gretna area said that Ocasio-Cortez, whom he characterized as a "vile idiot", should be shot. The lawmaker "needs a round... and I don't mean the kind she used to serve", officer Charlie Rispoli posted.

Nola.com first reported on the post by the Gretna police officer on Sunday. According to Slate.com, the department's police chief Arthur Lawson called the post "disturbing" that violated social media policies. "I'm not going to take this lightly and this will be dealt with on our end. It's not something we want someone that's affiliated with our department to make these types of statements. That's not going to happen," Lawson was quoted as saying. Donald Trump Defends Outburst On Democratic Congresswomen Says 'Don't Have a Racist Bone in My Body!'

"Trump is going to get one of these Congresswomen murdered. This is terrifying. I'm legit scared for them," posted one user. Trump has doubled down on his widely criticized suggestion that four non-white Democratic Congresswomen should "leave" the country because they "hate it", while the Democrats and some Republican lawmakers have accused him of racism and white supremacy.

The targeted Congresswomen are Ocasio-Cortez, Ilhan Omar of Minnesota, Rashida Tlaib of Michigan and Ayanna Pressley of Massachusetts. While Omar was born in Somalia and later moved to Minnesota, the other three were born in the US.