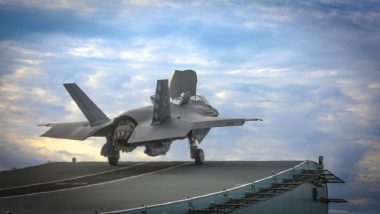 California, September 30: A United States Air Force F-35B fighter jet crashed on Tuesday in Imperial County, California. According to reports, the F-35B fighter jet crashed after it collided with an aerial refuelling tanker. The pilot of the aircraft ejected safely. He is currently undergoing treatment. Meanwhile, the crew of the KC-130J refuelling aircraft had also landed safely. Japan's F-35 Fighter Jet Goes Missing Over the Pacific Ocean.

The 3rd Marine Aircraft Wing tweeted, "At approximately 1600 it was reported that an F-35B made contact with a KC-130J during an air-to-air refueling evolution, resulting in the crash of the F-35B. The pilot of the F-35B ejected successfully and is currently being treated." An investigation has been launched to know the real cause of the incident. The KC-130J returned to the Thermal Aircraft. Pentagon Grounds Entire Fleet of U.S.’s F-35 Fighter Jets After Crash.

Lockheed Martin's F-35B short takeoff/vertical landing (STOVL) variant is the world's first supersonic STOVL stealth aircraft. It is designed to operate from austere bases and a range of air-capable ships near front-line combat zones. It can also take off and land conventionally from longer runways on major bases. The U.S. Marine Corps' F-35B aircraft reached initial operational capability (IOC) on July 31, 2015, and as of January 2017, a squadron of F-35Bs is permanently based at MCAS Iwakuni, Japan.

(The above story first appeared on LatestLY on Sep 30, 2020 07:42 PM IST. For more news and updates on politics, world, sports, entertainment and lifestyle, log on to our website latestly.com).