Donald J Trump is re-running for the US Presidential Election 2020 for a second term as the President of the United States. Trump owns a powerful real estate and entertainment business empire. Melania is a former model. They met in a party in New York in 1998 and were married in 2005. She is Trump's third wife. 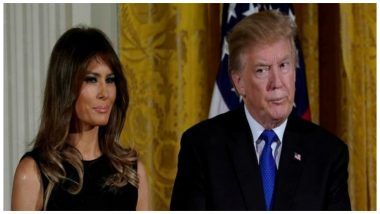 Donald and Melania Trump were married in 2005 (Photo Credit: PTI)

Trump was born to Fred Trump and Mary MacLeod in Queens on June 14, 1946. He is their fourth child. His father, Fred Trump was a real estate tycoon in New York. Trump helped his father in managing the extensive portfolio of residential housing projects in New York, before taking control of the company in 1971. He renamed the company the Trump Organisation.

He is credited with transforming the rundown Commodore Hotel into the Grand Hyatt in Manhattan and erecting the most famous Trump property, the 68-storied Trump Tower at Fifth Avenue. The real estate mogul is also behind several other famous properties including -Trump Place, Trump World Tower, Trump International Hotel and Tower, and so on. There are Trump Towers in Mumbai, Istanbul and the Philippines.

Apart from building properties, Trump also built an entertainment business empire. From 1996 until 2015, he was an owner in the Miss Universe, Miss USA, and Miss Teen USA beauty pageants. In 2003, he debuted on an NBC reality television show called The Apprentice, in which contestants competed for a shot at a management job within the Trump Organisation. He hosted the show for 14 seasons. US Elections 2020: 20% Polling Completed, Over 50 Million Americans Have 'Voted Early', Says Monitor.

Trump, The US President

Trump first announced his presidential candidature in 2015 from the Republic Party, became the official president candidate for the party in July 2016, and was eventually elected as the President of the USA in November 2016 after defeating the Democratic candidate and former Secretary of States, Hillary Clinton. President Trump's tenure has been a potpourri of accomplishments and controversies.

President Trump is credited with bringing in the First-Step law to improve the country's criminal justice system and the Republican Tax Bill whereby the corporate taxes were reduced to 21 percent from 35 percent. Trump also established the US Space Force. His biggest achievement at the global level was the eradication of ISIS from Iran and Syria and the death of Abu Bakr al-Baghdadi, the supreme commander of the Islamic State.

Trump's tenure was also marked with several controversies. Including his impeachment over the Ukrainian Deal after a whistleblower claimed that he had asked Ukrainian President Volodymyr Zelensky to launch an investigation against Joe Biden. The Russian Meddling of US Presidential Elections 2016, shutdown of the Federal Government over the Mexico wall funding issue and his alleged affair with adult-film star Stormy Daniels were among some critical controversies that did rounds in his tenure.

The tenure of Donald J. Trump received a mixed response from the US citizens, with the outbreak of COVID-19 and criticism over his way of handling it did provide an anti-climax for his tenure. Nevertheless, Trump aims to remain in the Oval Office after the US Presidential Elections 2020. He was formally nominated as the Republic Party's Presidential candidate on August 24, 2020, at the Republican National Convention after he crossed the delegate threshold necessary to win the Republican nomination—1,276 delegates—on March 17, 2020. Trump's re-election campaign has focused on the economy, jobs, immigration, and foreign policy. US Elections 2020 Betting Odds: Donald Trump vs Joe Biden Battle 'Most Wagered Event', $260 Million at Stake.

Melania Trump is the third wife of Donald Trump, and they together have a son named Baron William Trump. Melania was born in Yugoslavia. Her father sold cars and her mother worked in the textile industry. She started her career in modelling in Slovenia and later gained fame in Milan and Paris. In 1996, she came to New York as a model for Paolo Zampolli’s modeling agency. In the course of her career, she appeared on the covers of several magazines, and in 2000, she modeled for Sports Illustrated’s popular swimsuit edition. Melania first met Trump in 1998 at a party in New York. He was then married to Marla Maples, whom he was to divorce in 1999. After a long courtship, they married on January 22, 2005.

Melania Trump is the second foreign-born first lady of the USA. She did not move into the White House until June 2017, after her son finished the school year. In 2018 she launched the Be Best initiative, which focused on children. She has mostly been out of the political picture, but has, on occasions, been criticised for her "expensive lifestyle and foreign trips."

(The above story first appeared on LatestLY on Oct 29, 2020 02:09 PM IST. For more news and updates on politics, world, sports, entertainment and lifestyle, log on to our website latestly.com).