Who Are Nobel Peace Prize 2021 Recipients Maria Ressa and Dmitry Muratov? Know All About Them

The Norwegian Nobel Committee on Friday awarded the 2021 Nobel Peace Prize to Maria Ressa and Dmitry Muratov "for their efforts to safeguard freedom of expression". 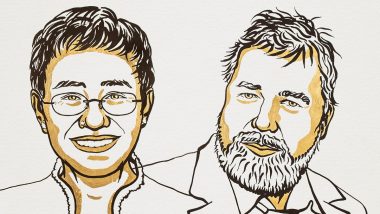 Maria Ressa was born on October 2 in 1963 in Manila, Philippines. A journalist by profession, Ressa is a fierce defender of freedom of expression. She has consistently raised her voice against abuse of power, use of violence and growing authoritarianism in Philippines under President Rodrigo Duterte. In 2012, she co-founded Rappler, a digital media company for investigative journalism, which documented how social media is being used to spread fake news, harass opponents and manipulate public discourse.

Born in 1961, Kuybyshev (now Samara), USSR (now Russia), Dmitry Andreyevich Muratov is among co-founder of the independent newspaper Novaja Gazeta. Muratov, a flag-bearer of freedom of speech in Russia, he has been the newspaper’s editor-in-chief since 1995. Despite frequent threats and harassment, he refused to abandon the newspaper’s independent policy. He has consistently defended the right of journalists to write anything they want about whatever they want, as long as they comply with the professional and ethical standards of journalism.

While awarding the Nobel Peace Prize to Ressa and Muratov, the Norwegian Nobel Committee described them as representatives of all journalists "who stand up for this ideal in a world in which democracy and freedom of the press face increasingly adverse conditions".

(The above story first appeared on LatestLY on Oct 08, 2021 03:04 PM IST. For more news and updates on politics, world, sports, entertainment and lifestyle, log on to our website latestly.com).