Who is Kim Yo-Jong? All You Need to Know About Kim Jong Un's Sister Who May Take Reins of North Korea

As reports of Kim Jong-un's ill health are making rounds, there are already speculations that who will take over North Korea's Supreme Leader post if anything happens to him. Kim Jong Un’s sister, Kim Yo Jong, 31, regarded as one of the most powerful women in North Korea is speculated to take over the supreme post if he met an untimely demise. 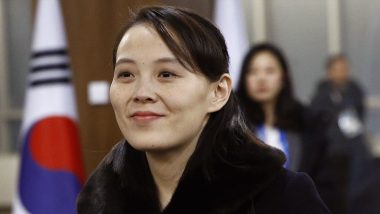 As reports of Kim Jong-un's ill health are making rounds, speculations have begun that who will take over North Korea's Supreme Leader post if anything happens to him. Kim Jong Un’s sister, Kim Yo Jong, 31, was repromoted to the post of alternate member of the Politburo, considered as Pyongyang's most powerful decision-making body. Regarded as one of the most powerful women in North Korea, Yo Jong is speculated to take over Kim Jong-un if he met an untimely demise. Kim Jong Un 'Brain Dead' or Infected With 'Coronavirus'? Here is What New Reports Say About North Korean Leader's Health.

She was removed from her Political Bureau post in April 2019 as punishment after negotiations with United States President Donald Trump slipped during the Hanoi summit. Yo Jong had helped commence communications with Seoul and Washington after she led North Korean delegation to South Korea during 2018 Pyeongchang Olympics. But the real question is who is Kim Yo-Jong?  Kim Jong Un ‘In Danger’ After Surgery: Donald Trump Administration Looking for Potential Successor if North Korean Leader Dies or Is Already Dead, Says Report.

Who is Kim Yo-Jong?

Kim Yo-Jong is the youngest daughter of former North Korean leader Kim Jong-il and granddaughter North Korea's founder Kim Il-sung. She is the sister of Kim Jong-un. There is not much known about her early life except that she studied in Switzerland. She first came into public notice during the funeral of her father Jong-il. Since then, she has steadily risen to power, holding prestigious posts as her brother's trusted aide.

According to Kim Yong-hyun, a professor at Dongguk University in South Korea's Seoul, the promotion of Kim Yo-jong and others is a sign that "the Kim Jong-un regime has ended its co-existence with the remnants of the previous Kim Jong-il regime by carrying out a generational replacement in the party’s key elite posts".

During the Hanoi Summit between Kim Jong Un and Donald Trump Hanoi Summit, she made sure that her brother was safe from spies. She also collected his cigarette butts to ensure that no intelligence agencies could get any DNA or health information about Kim Jong-un.

(The above story first appeared on LatestLY on Apr 21, 2020 06:43 PM IST. For more news and updates on politics, world, sports, entertainment and lifestyle, log on to our website latestly.com).