Speaking to E! News about F9 and how she honoured Paul in the latest installment of the action-adventure film, Jordana revealed how close she and Paul were to dating in real life. 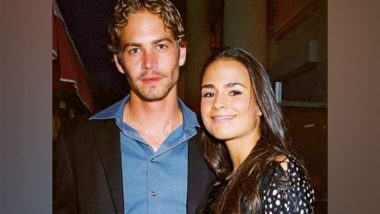 Actor Jordana Brewster spoke about the crush she had on late star Paul Walker at the F9 film premiere, held on Friday. Speaking to E! News about F9 and how she honoured Paul in the latest installment of the action-adventure film, Jordana revealed how close she and Paul were to dating in real life. The 'Fast and Furious' actor recalled the time when director Rob Cohen revealed, Paul had a crush on her while filming the first movie and surprisingly enough, Jordana said she "didn't know that." Fast And Furious 9 Star Vin Diesel Teases Possibility of Paul Walker’s Daughter Meadow Walker Appearing in F10.

She further admitted that if she would have known things a little earlier then things might have been different between her and Paul. Jordana went on to reveal that she also had "a crush on him" in 'Fast and Furious' 4 to 7. As for why she didn't spill the beans, Jordana explained to E! News that, "I never got to tell him that but I think on many levels he knew." Jordana went on to marry Andrew Form in 2007, with whom she shares sons Rowan and Julian. But as always, the 'Fast and Furious' family remains close to her heart, especially since she took a couple of accessories from Mia Toretto's wardrobe. Cody Walker Reacts to Late Brother Paul Walker’s Tribute in the Fast And Furious Film Franchise.

Speaking about Paul Walker, he was one of the most celebrated actors of Hollywood, best known for his role as Brian O'Conner in the 'Fast and Furious' franchise. The actor gained recognition in the early 1990s after appearing in the television soap opera 'The Young and the Restless' until he was spotted as a child artist in the early 1970s and 1980s. The actor died on 30 November 2013 due to a car accident in California, USA. The crash didn't happen on the set, but he was in the middle of filming 'Furious 7' at the time.