Assam NRC Row: No Bias or Prejudice Against Those Whose Names Did Not Figure in Final List, Says MEA 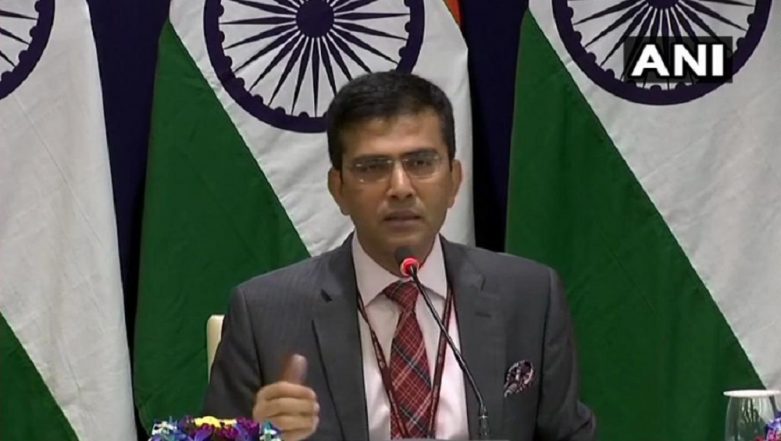 New Delhi, September 12: The National Register of Citizens (NRC) in Assam was rolled out following a "non-discriminatory" process and nearly 19 lakh people left out of it will have adequate legal options to contest their exclusion, the Ministry of External Affairs said on Thursday.

Raveesh Kumar, spokesperson in the ministry, asserted that there was no bias or prejudice against those whose names did not figure in the final NRC. The NRC has been prepared to identify genuine Indian citizens living in Assam since March 24, 1971, or before, and weed out illegal Bangladeshi migrants from the state. Out of 3.3 crore applicants, over 19 lakh people were excluded from the final NRC published on August 31. NRC Final List 2019: Two FIRs Lodged Against Assam Coordinator Prateek Hajela For 'Exclusion' of Names.

"Which country allows illegal people to stay in its territory... Of course, the due process has to be followed and it is being followed. We have explained that the NRC is a statutory and transparent process," Kumar said during a media briefing.

"It is a legal process mandated by the Supreme Court. It is not an executive-driven process. It is a non-discriminatory process," he added.

Apart from existing 100 tribunals, the Assam government is establishing 200 more tribunals to receive appeal against exclusion from the NRC.

"There is a right to appeal at the tribunal. Beyond tribunal, you have the right to approach the high court and Supreme Court," he said.

Asked if those identified as illegal Bangladeshis will be sent back to Bangladesh, Kumar said: "Let us not talk about what will happen and how the whole thing will be sorted out."

"What happens in the future will be decided at a later stage. I do not have an answer to that," he said.

Kumar also made a mention of External Affairs Minister S Jaishankar's comments during his recent visit to Bangladesh that NRC is an internal matter of India.

The process of documenting and identifying illegal immigrants in Assam is India's "internal matter", Jaishankar had said in Dhaka last month.