Get latest articles and stories on Business at LatestLY. On this auspicious occasion of Republic Day, 'Bolenge Vande Matram' song launched. This song is a tribute to all the people of India who are the true colours of India. The music video is a result of hardworking and brilliant individuals working together to show the culture of India in a true masterpiece. 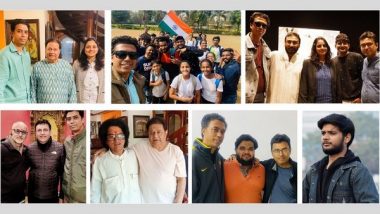 Mumbai (Maharashtra) [India], January 25 (ANI/PNN): On this auspicious occasion of Republic Day, 'Bolenge Vande Matram' song launched. This song is a tribute to all the people of India who are the true colours of India. The music video is a result of hardworking and brilliant individuals working together to show the culture of India in a true masterpiece.

This music video concept is based on promoting and creating awareness of Mallakhamb, which is a traditional sport, originating from the Indian subcontinent, in which gymnasts perform aerial yoga or various gymnastic postures and wrestling grips in concert with a vertical stationary or hanging wooden pole, cane, or rope. The word Mallakhamb also refers to the wooden pole used in the sport.

Rohit Y Prasad is the Producer, Director of the song Bolenge Vande Mataram and has worked in the entertainment industry for over 22 years. He mentioned that this project wouldn't have been possible without his supporters, friends & family. He, too, was excited with the release and was confident that people were going to love and appreciate the sport as much as the music. He specially thanked Dr Vinod Ghosalkar, Abhishek Ghosalkar and DSF for supporting him during the making of the video. He further was grateful to Anup Jalota, Anjjan, MK Roy, Kissu and Garima.

Talking about the song, Anup Jalota praises the concept of the song & explains the benefit of the Mallakhamb & he had a wonderful experience working on the project. He mentioned that Rohit Prasad is very hardworking, dedicated & passionate about his work; he has completed the project in less than 8 days from music to video, which is incredible.

Adds Anjjan Bhattacharya, "I'm very excited that I could share this song with Anup & with young talents like MK Roy, Kissu Rajput & Garima Joshi, who are not just wonderful Artists but also warm people. All three Artist tones are very distinct and take the song to the next level. The track has turned out to be beautiful, and I'm confident people will love it. The Producer & Director Rohit Prasad is very passionate and dedicated to his work.

Garima Joshi, who's the first-timer as a singer, says she was very excited and nervous, but then everyone was supportive and comforted her. Garima is the mother of 2 wonderful kids, Yash Joshi and Naman Joshi; they too were very excited about the song and felt proud of their mother. Garima Joshi and the kids were also very thankful to Rohit Prasad and his team for making this possible.

Arjit Biswas said, "It was nice working with Rohit. He is very dedicated and enthusiastic. Hats off to him to show such courage in completing this project in such a short span of time, overcoming all hindrances in such a critical time period."

Mk Roy Lyricist & Composer said, " It was a very different experience for me from my previous works and collaborations. I really enjoyed the songwriting process and working on something that is dedicated to our country. I would love it if people would see Mallkhamb on a different level in future. Looking forward to working on more projects with Core Music. Thanks to Rohit Y Prasad for giving me this opportunity. Cheers to the wonderful team Bolenge Vande Matram...!!"

Kissu Rajput, who is a singer and composer himself, further added that he had got a lot of happiness in doing this project because so many people have worked wholeheartedly and honestly, so thank you, Team Core Music and Team Mallakhamb, for your hard work.

The music video was released on 24 January on CORE MUSIC

Bolenge Vande Mataram is a very soulful song, written with a lot of love. We have put our hearts in it, and I hope it will touch people's souls.