Mohammad Rizwan would aim to inspire his side for another memorable PSL season after a title win last year. Needless to say, the defending champions would be one of the biggest contenders for the PSL 2022 title as well. 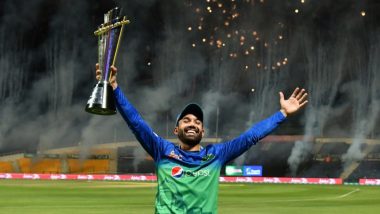 Multan Sultans would be looking to have a successful title defense when they start their campaign against Karachi Kings on January 27. A maiden title triumph last year would definitely put them as one of the strong contenders for the top honours this year as well. What has come as an added boost to this franchise has been captain Mohammad Rizwan, who recently got named the ICC Men's T20I Cricketer of the Year,  a reward for his exemplary performances in the shortest version of the game in 2021. The wicketkeeper-batsman amassed over 1300 runs in T20Is last year and one can expect to carry on with that imperious form as he dons the Multan Sultans jersey and leads his side on the field for Pakistan Super League 2022.

Apart from Rizwan, defending champions Multan Sultans have a good squad with a mix of both local talent and international stars. Players like Sohaib Maqsood, Khusdil Shah and also Shahnawaz Dhani would be some of the Pakistan stars to watch for in this squad. Names of international repute like Imran Tahir, Tim David, Rovman Powell and also Rilee Rossouw would also be key players in this team. The loss of a veteran like Shahid Afridi would mean that the spin department of this side is slightly weakened. In that case, a lot would rest on Tahir's shoulders. Let us have a look at the schedule and squad for Multan Sultans in PSL 2022.

(The above story first appeared on LatestLY on Jan 25, 2022 05:15 PM IST. For more news and updates on politics, world, sports, entertainment and lifestyle, log on to our website latestly.com).