Shares of HDFC Bank traded flat during early hours on Monday after the Reserve Bank of India (RBI) imposed a penalty of Rs 10 crore for deficiency in its regulatory compliance. 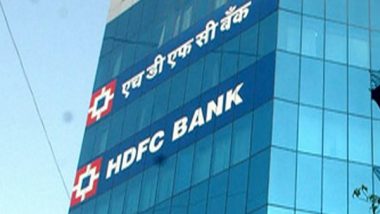 Mumbai, May 31: Shares of HDFC Bank traded flat during early hours on Monday after the Reserve Bank of India (RBI) imposed a penalty of Rs 10 crore for deficiency in its regulatory compliance.

"We wish to inform you that the RBI has imposed by an order dated May 27, 2021 a monetary penalty of Rs 10 crore on HDFC Bank," the company said in a statement.

"The bank has always endeavoured to maintain the highest standards of compliance and culture within the organisation, and shall continue to do so, including engaging with the regulator in this regard."

The RBI imposed a Rs 10 crore fine on HDFC Bank for contravention of provisions of section 6(2) and section 8 of the Banking Regulation Act 1949, the central bank said in a statement on Friday.

The action was taken after RBI looked into a whistleblower complaint about irregularities in HDFC Bank's vehicle loan division on July 23, 2020.

The complaint reportedly claimed that the lender forced its customers to purchase a vehicle tracking device for four years till December 2019, which stands in contravention of the abovementioned sections of the Banking Regulations Act that prohibit banks from indulging in non-financial businesses.

"An examination of documents in the matter of marketing and sale of third-party non-financial products to the bank's customers, arising from a whistleblower complaint to RBI regarding irregularities in the auto loan portfolio of the bank, revealed inter alia contravention of the aforesaid provisions of the Act and the regulatory directions," said the RBI.

"In furtherance to the same, a notice was issued to the bank advising it to show cause as to why penalty should not be imposed for contravention of the provisions of the Act/directions."