The flying squad of the Election Commission (EC) on Thursday checked the luggage of former Karnataka Chief Minister and BJP leader BS Yeddyurappa at a helipad in Shivamogga. 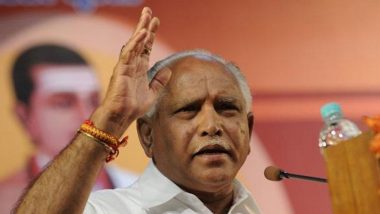 Earlier on Tuesday too the EC had checked Yeddyurappa's luggage. The details regarding whether the EC made any seizure are awaited.Earlier, the Income Tax department had seized Rs 1.66 crore in cash during raids conducted across Karnataka. On March 28, a total of 24 premises were searched by the IT Department. Karnataka Congress Faces Rebellion: DK Shivakumar Alleges Horse Trading by BJP, Accuses HD Kumaraswamy of Being Lenient.

The checking comes days after Karnataka chief minister HD Kumaraswamy's SUV was stopped at a checkpost in Hassan for checking. On Thursday, 14 constituencies in Karnataka went to poll. The state saw almost 68 per cent voter turnout. Polling took place in 30,164 polling stations in the 14 constituencies which has a voter population of 2.67 crore. "The estimated voter turnout at the end of polling in 30,164 booths spanning 14 parliamentary seats is 67.89 per cent," a senior poll official said.