American actor Annaleigh Ashford has joined the cast of Hulu's limited series Immigrant, which will be about the founder of Chippendales. 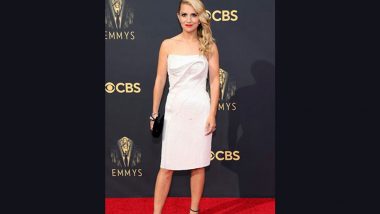 American actor Annaleigh Ashford has joined the cast of Hulu's limited series Immigrant, which will be about the founder of Chippendales. According to The Hollywood Reporter, Ashford has joined the eight-episode drama and will star opposite Kumail Nanjiani and Murray Bartlett in the series, which comes from Disney's 20th Television and creator Robert Siegel. How I Met Your Father: Hilary Duff and Suraj Sharma’s Hulu Series Drops a Sweet How I Met Your Mother ‘Cameo’ That Leaves Fans Nostalgic! (SPOILER ALERT).

Immigrant will tell the story of Somen 'Steve' Banerjee (Nanjiani), the Indian-American entrepreneur who started Chippendales. The series will detail the darkly comedic and crime-ridden story behind the male striptease revue.

Ashford will play Irene Banerjee, an accountant and Steve's wife; the couple fell in love over a shared passion for tax loopholes and revenue expansion. How I Met Your Father: Hilary Duff, Chris Lowell’s Hulu Original To Premiere On Disney+ Hotstar On January 19!

Shy and unassuming at first, she steadily finds her footing within the company, growing into a formidable behind-the-scenes powerhouse. Bartlett would be playing Nick De Noia, Steve's business partner and the man who was responsible for transforming Chippendales from a seedy West LA strip club to the worldwide phenomenon it became. Tony Award winner Ashford currently stars in CBS comedy 'B Positive' and played Paula Jones in 'Impeachment'. Her TV credits also include Showtime's 'Masters of Sex' and Netflix's 'Unbelievable'.

Siegel will executive produce 'Immigrant' with Nanjiani, Dylan Sellers, Jenni Konner, Ramin Bahrani, Emily V. Gordon, Nora Silver and Rajiv Joseph, who will write on the series along with Mehar Sethi. Siegel and Konner serve as co-showrunners, and Bahrani will direct. Jacqui Rivera is co-EP and Annie Wyman is co-producer, as per The Hollywood Reporter.