Beyonce has unveiled the cover art for her new album Renaissance and with it, the thoughts and feelings she felt. She took to social media to share a heartfelt note about the album. She mentioned that making this album allowed her to find escape during difficult times. 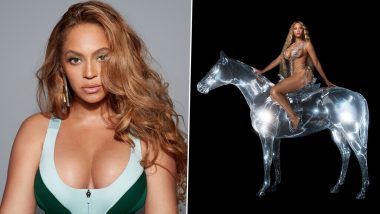 After teasing her new album announcement, singer and songwriter Beyonce has now given her fans a glimpse of what is in store for them! Beyonce on Thursday shared the cover artwork for her new album Renaissance, set to release on July 29. The image shows her posing regally atop the silhouette of a luminous horse, as per Variety. Beyoncé Goes Almost Naked As She Rides a Stallion on Cover Art of Her Renaissance Album (View Pic)

Along with the artwork, Beyonce shared a note, that read, "Creating this album allowed me a place to dream and to find escape during a scary time for the world. It allowed me to feel free and adventurous in a time when little else was moving. My intention was to create a safe place, a place without judgment. A place to be free of perfectionism and overthinking. A place to scream, release, feel freedom. It was a beautiful journey of exploration. I hope you find joy in this music. I hope it inspires you to release the wiggle. Ha! And to feel as unique, strong, and sexy as you are."

Given the title Renaissance, fans around the world have speculated that the image is intended to pay homage to John Collier's 19th-century painting Lady Godiva. Some have also pointed out the resemblance to a photograph of Bianca Jagger on horseback at Studio 54.

Over a week ago, Beyonce surprisingly released "Break My Soul", the lead single from her forthcoming seventh solo studio album. The track channels '90s house music via a sample of Robin S' 1993 hit "Show Me Love" and features vocals by Big Freedia.

As per Variety, Renaissance is said to contain country music and dance tracks, although it's unclear whether the country songs will be released as a separate album or as part of the first Renaissance release. Beyonce has released four albums since 2016's Lemonade, although none are full solo studio albums. Beyonce Drops ‘Break My Soul’ Song From Her Upcoming Album Renaissance.

In 2018, she released Everything Is Love with husband Jay-Z under The Carters name; in April 2019, she released Homecoming, an album from her explosive 2018 headlining performance at Coachella; and that summer, The Lion King: The Gift, a Disney film companion album that included several new Beyonce songs, while a deluxe edition of this album with three bonus tracks was released the next year.