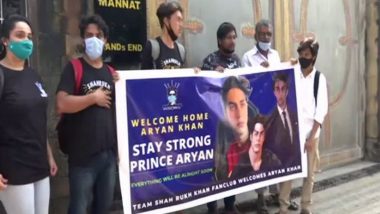 Due to the crowd of fans, SRK and Aryan initially found it tough to enter their home, however, after a few minutes, their car finally managed to make its way into Mannat. One Death, Multiple Positive Cases of COVID-19 Detected On Bhakharwadi Sets.

Aryan was granted bail on Thursday evening after Bombay High Court issued a detailed bail order which stated that the accused should appear before Narcotics Control Bureau (NCB) every Friday and was asked to surrender his passport. Aryan was arrested on October 3. An NCB team busted an alleged drugs party on the Cordelia Cruise ship which was on its way to Goa at mid-sea on October 2. A total of 20 people, including two Nigerian nationals, have been arrested so far in the case.