Harry Styles' Los Angeles concert is pushed to another date! His November 4 concert at the Kia Forum in Los Angeles has been postponed to November 6, due to "band illness". 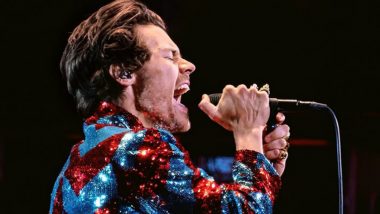 Global icon Harry Styles' Los Angeles concert is pushed to another date! His November 4 concert at the Kia Forum in Los Angeles has been postponed to November 6, due to "band illness." Harry Styles Gets Hit in the Groin By Water Bottle Thrown by Fan; Check Out His Hilarious Response (Watch Video).

On Instagram, the venue disclosed the new date, citing "an abundance of caution." No more dates on Styles' "Love on Tour" will be impacted by the rescheduled performance, and all previously purchased tickets will be honoured. Veteran blues musician and multi-instrumentalist Ben Harper will still open the evening.

The date on November 4 is in the middle of a 15-night run in Los Angeles. In the past, Styles has performed as the headlining act for 15 completely sold-out shows at Madison Square Garden in New York as well as six nights each in Chicago and Austin. According to Variety, in addition to dressing as Danny Zuko from 'Grease' for his first 'Harryween' performance in Los Angeles on October 31, Styles also sang Olivia Newton-John's 'Hopelessly Devoted to You' in front of a slideshow of the late singer, who passed away earlier this year at the age of 73 following a protracted battle with cancer.

As per the reports of Variety, the tour follows a 42-date arena tour that sold out in 2021 as well as two exclusive 'One Night Only' performances in New York and London. It adopts the album's idea by transforming venues across North America into Harry's actual home. Harry Styles Reacts to Fan’s Sign Calling Him ‘Daddy’ at His Harryween Concert (Watch Video).

Aside from touring, Styles has been active this year with leading roles in two movies: Michael Grandage's My Policeman, which also stars Emma Corrin and David Dawson, and the psychological thriller Don't Worry Darling with Florence Pugh and Chris Pine.