Is there anything that Hrithik Roshan cannot do? It's a difficult task to guess because he hardly disappoints his fans. The Super 30 actor usually takes up a lot of challenges and his social media is proof! 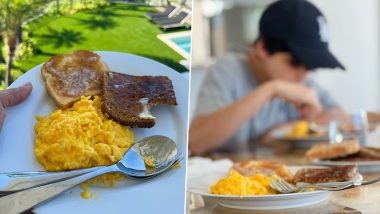 Is there anything that Hrithik Roshan cannot do? It's a difficult task to guess because he hardly disappoints his fans. The Super 30 actor usually takes up a lot of challenges and his social media is proof! Be it surfing in the ocean, training outdoors, skiing in the Swiss Alps or dancing his heart out, Hrithik Roshan can do it all. The actor now has another hat to wear - the chef's hat! Recently, Hrithik tried his hand at cooking and going by the picture he posted, he did a pretty good job as he made scrambled egg and toast for his sons. In the photo shared by him, his son is seated in the background, as he enjoyed the meal cooked by his dad. Hrithik Roshan Shares Video With Team Members and Their Travel Memories, Expresses Love for Food – WATCH.

Sharing the photos, Hrithik wrote, "My god! I surprise myself I tell you. I should cook more often. What a talent! I'm amazing (all rubbish but I choose to trust the little man Hridz). Hehe. #breakfastclub #iwannacook #LAdiaries."

As soon as he uploaded the post, his friends from the industry flooded his comment section. One of Hrithik's closest friends Preity Zinta commented "Pls learn so u can cook for us." His War co-star Tiger Shroff wrote: "Looks amazing." Actor Ishaan Khatter also passed a compliment and wrote, "10/10 would smash that scramble". Most Handsome Men in the World 2022: BTS V Tops the List, Followed by Paul Rudd, Hrithik Roshan.

Hrithik is currently in Los Angeles, spending some family time with both his sons - Hrehaan and Hridaan. As far as films are concerned, he will next be seen in the action-thriller Vikram Vedha alongside Saif Ali Khan. The film is a remake of the Tamil film of the same name starring R Madhavan and Vijay Sethupathi. The film will also have Radhika Apte, Rohit Saraf and Yogita Bihani in supporting roles. Hrithik has also been signed up for Siddharth Anand's next opposite Deepika Padukone. This is not the first time Hrithik is collaborating with Siddharth Anand, the duo earlier worked in 'Bang Bang' featuring Katrina Kaif and Jaaved Jaffrey.