In her new Lifetime documentary, Janet Jackson has expressed that she has moved on from the infamous Super Bowl Nipplegate scandal and added that she is still very good friends with Justin Timberlake. 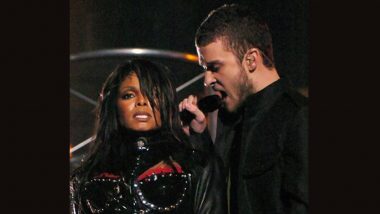 In her new Lifetime documentary, Janet Jackson has expressed that she has moved on from the infamous Super Bowl Nipplegate scandal and added that she is still very good friends with Justin Timberlake. As per E! News, while joining her onstage at the 2004 Super Bowl Halftime Show in a surprise performance, the 'Cry Me a River' singer ripped part of her top off, accidentally exposing one of her breasts. Taylor Swift’s Stalker Arrested After Trying to Get into Singer’s NYC Apartment.

Both stars apologized and in a statement, Justin called the moment a "wardrobe malfunction." The incident drew more than 500,000 complaints and FCC indecency fines (that were later reversed), and TV executives and many viewers put the blame on Janet, whose career stalled as a result. "This whole thing was blown way out of proportion," Janet said in a selfie video shown in her new Lifetime documentary 'Janet Jackson.', which aired this weekend. "Of course, it was an accident that should not have happened but everyone is looking for someone to blame and that's got to stop. The Masked Singer Season 7 Premiere Date Announced! Show Returning on March 9, 2022.

Justin and I are very good friends and we will always be very good friends. We spoke just a few days ago and he and I have moved on and it is time for everyone else to do the same." Justin has not commented on Janet's recently aired remarks. In February 2021, he issued a statement of apology on Instagram to her as well as his ex-girlfriend Britney Spears, in response to fresh criticism of him on social media following Hulu's release of The New York Times Presents: 'Framing Britney Spears' documentary.

"I am deeply sorry for the time in my life where my actions contributed to the problem, where I spoke out of turn, or did not speak up for what was right," he said. "I understand that I fell short in these moments and in many others and benefited from a system that condones misogyny and racism." Justin added, "The industry is flawed. It sets men, especially white men, up for success. It's designed this way. As a man in a privileged position, I have to be vocal about this. Because of my ignorance, I didn't recognize it for all that it was while it was happening in my own life but I do not want to ever benefit from others being pulled down again...I have not been perfect in navigating all of this throughout my career. I know this apology is a first step and doesn't absolve the past. I want to take accountability for my own missteps in all of this as well as be part of a world that uplifts and supports."

In her documentary, Janet recalled speaking with Justin "once" just after the Super Bowl incident. "He said, 'I don't know if I should come out and make a statement.' I said, 'Listen, I don't want any drama for you. They're aiming all of this at me. If I were you, I wouldn't say anything.'" Janet has rarely spoken publicly about the scandal. In 2006, when asked by Oprah Winfrey if she felt Justin failed to adequately stick up for her, she replied, "To a certain degree, yeah." She also told her that she regretted issuing an apology because "it was an accident. And management I had at the time, they thought it was important that I did it...And I had said to them, 'Why am I apologizing for an accident?'"

In her documentary, Janet also recalled how she and her family were affected by the Super Bowl incident. She said that people would come up to a few of her brothers and tell them that they wished she would "be put away." "It can take its toll on you, emotionally. So I just stayed focused on my work, stayed close to friends, stayed in touch with family," she added. "And that was enough for me to pull through."