Mandy Moore has announced that she's cancelling her remaining show dates this year to focus on her health during her pregnancy. 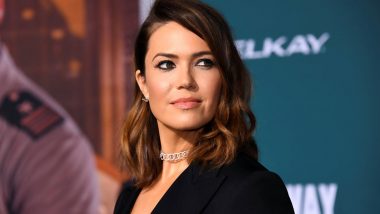 American singer and actor Mandy Moore has announced that she's canceling her remaining show dates this year to focus on her health during her pregnancy. According to The Hollywood Reporter, in a statement posted to Instagram, Moore wrote, "When we booked these shows, I wasn't pregnant and although I truly thought I could power through, the way we are traveling (long hours on the bus and not getting proper rest) has caught up, taken its toll, and make it feel too challenging to proceed." Nick Jonas Tries ‘Belly Roll’ With Shakira And The Colombian Singer Can’t Stop Laughing (Watch Video).

"I know that I have to put my family and my health (and the health of my baby) first and the best place for me to be right now is at home," she added.

Moore announced earlier this month that she is expecting baby No. 2 with husband Taylor Goldsmith. She announced the news in an Insta post with a picture of son Gus wearing a "big brother" T-shirt. "One incredibly seminal chapter of my life just ended and the next one, as a mother of two, is about to start... and are we ever so deeply grateful and excited. Baby Boy Goldsmith #2 coming this fall!" she captioned the sweet photo. Nicole Scherzinger Birthday: Bikini Pics of the Singer that are Smokin’ Hot!

The This Is Us alum and Goldsmith married in November 2018. The couple announced in February 2021 that they had welcomed their first child together, August Harrison Goldsmith. During an interview with The Hollywood Reporter that published last month and was pegged to her NBC drama series signing off after six seasons, Moore said she was planning to figure out what's next for her career after she completed her tour.