Actors Pratik Gandhi and Patralekhaa are set to headline a film based on the lives of noted social reformers Jyotirao Govindrao Phule and his wife Savitribai Phule, makers announced on Monday. 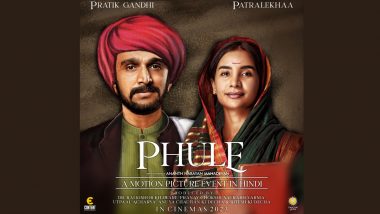 Actors Pratik Gandhi and Patralekhaa are set to headline a film based on the lives of noted social reformers Jyotirao Govindrao Phule and his wife Savitribai Phule, makers announced on Monday. The Hindi film, titled "Phule", will be written and directed by Ananth Narayan Mahadevan. The first look of "Phule" featuring the "Scam 1992" star and Patralekhaa, was released on Jyotirao Phule's 195th birth anniversary. The Great Indian Murder: Pratik Gandhi Opens Up About Working With Richa Chadha in Disney+ Hotstar’s Show.

The film is backed by Content Engineers and Dancing Shiva Productions.

Gandhi said it is a "real honour" to showcase the social reformer's legacy to the world through the film. "'Phule' is my first biographical film and even though the challenges are huge, given the fact that he was such an inspirational Indian leader; it's also a dream role and I can't wait to get started. I remember saying yes immediately after hearing the narration. Vidya Balan, Pratik Gandhi, Ileana D’cruz and Sendhil Ramamurthy Finish Filming for Their Untitled Rom-Com Film.

"Some characters just come to you and I am glad that Ananth sir came to me with this film. It's wonderful that Content Engineers and Dancing Shiva have taken the responsibility of telling an unexplored part of Mahatma Jyotiba and Savitribai Phule's life to the millennials," the 41-year-old actor said. Patralekhaa, best known for her role in Hansal Mehta's "City Lights", said she is certain the film will stay with her "long after it is over".

"I grew up in Shillong, Meghalaya, which boasts of a matriarchal society so gender equality is very close to my heart. Savitribai joined hands with her husband to start the first indigenously-run school for girls in Pune way back in 1848. "Mahatma Phule also championed widow remarriage and together they set up an orphanage to prevent infanticide. This is one film that will stay with me long after it is over," the 33-year-old said.

Mahadevan, who has directed films like "Mee Sindhutai Sapkal", "Gour Hari Dastaan" and "Bittersweet", said the country has many inspiring stories that are "still unknown or for some reasons kept under wraps by historians." "Films are a great way to connect the younger generation to these unsung heroes. Jyotiba and Savitri Phule are the torchbearers of social revolution in India and I couldn't have asked for a better cast and team that is backing this project," he added.