Get latest articles and stories on Entertainment at LatestLY. South Indian actor and Makkal Needhi Malam chief Rajnikanth on Wednesday congratulated singer and film composer Ilayaraja for being appointed as a member of the Rajya Sabha. 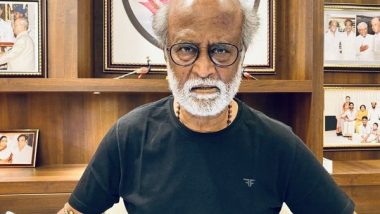 Taking to Twitter, the legendary Tamil actor, Rajnikanth wrote, "My heartiest congratulations to my dear friend Ilayaraja, a musician, who has been appointed as a member of the Rajya Sabha."

As soon as Rajnikanth tweeted his congratulatory message, Twitter flooded with wishes to both Ilayaraja and Rajnikanth.

Known to fame for his noteworthy songs, R. Gnanathesikan, who is popularly regarded as Ilayaraja has many famous Tamil songs to his name like 'Kuyil Paattu', 'Vikram Vikram', 'Unna Nenachu', and 'Valaiyosai'. He is a renowned music composer and singer in the Tamil film industry.

Meanwhile, talking about Rajnikanth, the 'Thalaiva' of Tollywood, needs no description. He has established a stronghold in the Tamil film industry with the portrayal of various characters and performing in every movie genre. Some of Rajnikanth's best films include, 'Kabali', 'Sivaji', 'Annaatthe', and 'Lingaa' to name a few of the plethora of movies he has acted in. (ANI)