Sonam Kapoor, who recently announced her pregnancy, celebrated her 20-year-long friendship with fellow star Rani Mukerji. She took to her Instagram handle and shared a couple of pictures featuring her and Rani in an embrace. 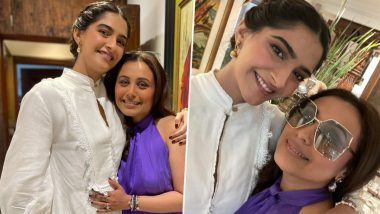 Sharing a heartfelt note, in the caption, she wrote, "A friendship that's lasted 20 years. Love you rani. Also belated happy birthday to my favourite actress." In the snaps, while Sonam could be seen sporting a simple white attire, Rani, on the other hand, contrasted her look by wearing a dark purple top.

On March 21, in a social media post, Sonam had announced that she and her husband Anand Ahuja will be welcoming their first child this fall. She also shared a few images in which she could be seen cradling her baby bump while lying on the couch with Anand. For the unversed, the duo had tied the knot back in 2018, in a traditional wedding ceremony, in Mumbai.

Meanwhile, on the work front, Sonam has a crime thriller titled Blind in her kitty.