Taapsee Pannu has finished shooting for her film Shabaash Mithu, which is the biopic on Indian women's ODI and Test captain, Mithali Raj. On Tuesday, Taapsee took to Instagram and shared the update with her followers. 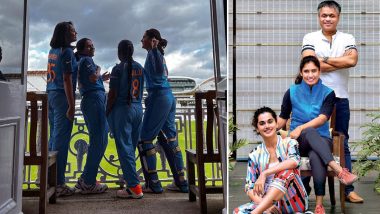 Shabaash Mithu is directed by Srijit Mukherji, who replaced filmmaker Rahul Dholakia after the latter had to quit the project owing to a change in schedule. Alongside the wrap-up announcement, Taapsee uploaded a picture from Lord's stadium. In the image, she can be seen wearing the Indian cricket team jersey. Teacher’s Day 2021: Taapsee Pannu Is All Praises for Her ‘Shabaash Mithu’ Coach Nooshin Al Khadeer on the Occasion.

Shabaash Mithu is scheduled to release in 2022.