More than a month after the release of the film West Side Story, stars are finally sharing their thoughts on the sexual assault allegations against their co-star Ansel Elgort, who denied the claims in 2020. 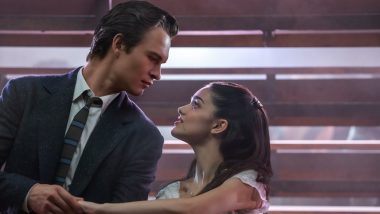 More than a month after the release of the film West Side Story, stars are finally sharing their thoughts on the sexual assault allegations against their co-star Ansel Elgort, who denied the claims in 2020. West Side Story key actors Rachel Zegler, Rita Moreno and Ariana DeBose recently shared their thoughts with The Hollywood Reporter on the sexual assault allegations against the lead actor Elgort. Art Directors Guild Awards 2022: West Side Story, Cruella, Nightmare Alley, The Green Knight Lead the Nominations; Here’s the Complete List of the Nominees.

Speaking with the outlet on Wednesday, the stars of Steven Spielberg's beloved musical adaptation weighed in on the claims against their fellow co-star, who plays the leading role of Tony in the film, with Moreno stating that she would not make "judgements" on the accusations, which Elgort has previously denied. "I think it would have been absolutely horrendous and wrong for anyone to take sides in that matter. It's not for me to make those judgments," Moreno told the outlet. West Side Story Box Office: Steven Spielberg’s Musical Saga Underwhelms With Disappointing $10 Million Debut.

DeBose added, "Nobody really knows what's going on in anyone's head. Only the people who were involved in that situation know what actually went down."

The 20-year-old actor added, "You just hope that the people involved are OK, that they are asked in a respectful manner and that they are given the opportunity to answer for themselves." For the unversed, in June 2020, a Twitter user named Gabby alleged in a now-deleted tweet that Elgort "sexually assaulted me when I was 17," after she allegedly DMed the actor online. Elgort denied the allegations in a since-deleted post on Instagram that month, writing, "I cannot claim to understand Gabby's feelings but her depiction of events is simply not what happened," as per E! News.

"I have never and would never assault anyone. What is true is that in New York in 2014, when I was 20, Gabby and I had a brief, legal and entirely consensual relationship," he added in his statement at that time. Elgort largely avoided attending public events following the controversy. In September 2021, he attended the Daily Front Row's 8th annual Fashion Media Awards with his parents. In November, the actor took to the red carpet for the New York City premiere of West Side Story alongside his longtime girlfriend Violetta Komyshan, marking their first public appearance together since January 2020, as per E! News.