British actor Gillian Anderson has been roped in to play the role of Eleanor Roosevelt, wife of President Franklin D Roosevelt, in Showtime's upcoming limited series The First Lady. 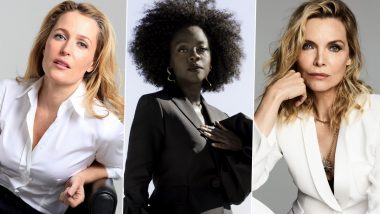 British actor Gillian Anderson has been roped in to play the role of Eleanor Roosevelt, wife of President Franklin D Roosevelt, in Showtime's upcoming limited series The First Lady. The show, formerly known as “First Ladies", also features actor Viola Davis as Michelle Obama and Michelle Pfeiffer as Betty Ford. According to The Hollywood Reporter, Emmy winner Susanne Bier has come on board to direct the series. Rachel McAdams, Abby Ryder Fortson to Star in a Film Adaptation of Judy Blume’s Iconic Novel ‘Are You There God? It’s Me, Margaret’.

The episodes will focus on the personal and political lives of First Ladies from throughout the history of the US. Season one will feature the life stories of Roosevelt, Ford and Obama. Novelist Aaron Cooley is writing the series and will also serve as the executive producer along with Cathy Schulman, Davis and Julius Tennon of JuVee Productions, Andrew Wang, Jeff Gaspin and Brad Kaplan. “Gillian Anderson is an actress of incredible range and exquisite talent – she is the perfect choice to complete this powerhouse trio, who will inhabit the roles of these iconic women. The Legitimate Wise Guy: Harvey Keitel, Emile Hirsch and Ruby Rose to Star in George Gallo’s Gangster Movie.

“It's inspiring to have Gillian, Viola Davis, Michelle Pfeiffer, Susanne Bier and Cathy Schulman at the forefront of ‘The First Lady.' They have truly set the stage for a landmark Showtime series,” said Amy Israel, executive vice president of scripted programming for Showtime. The project marks Anderson's second outing as a historical figure following her portrayal of British Prime Minister Margaret Thatcher in Season 4 of “The Crown” at Netflix.

Roosevelt served as the first lady of the US from 1933-45, making her the longest serving first lady in history. She was an American political figure, diplomat and activist. She also pushed the United States to join and support the United Nations and became its first delegate.