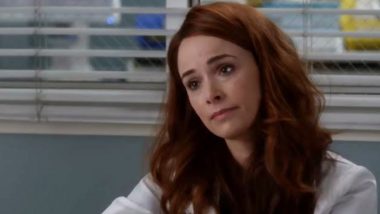 Actor Abigail Spencer is all set to re-appear in the popular medical drama Grey's Anatomy's upcoming 18th season. According to Variety, Spencer will reprise her role as Megan in the upcoming 18th season of ABC's medical drama show. Megan is the younger sister of Kevin McKidd's character Owen Hunt, is also a trauma surgeon, and was presumed dead after going missing for 10 years during the Iraq War. Grey’s Anatomy Season 18: Peter Gallagher Joins ABC’s Medical Drama as a Series Regular.

Variety informed that in the Season 13 finale and the beginning of the 14th season, Megan was freed from captivity, and returned to Seattle. There, she reconnected with Owen and had the surgery necessary to close a wound she had suffered during a bombing. After she recovered, Megan moved to Los Angeles with her son, Farouk, a Syrian orphan whom she'd raised, and Nathan (Martin Henderson), her fiance. Jesse Williams is Leaving Grey’s Anatomy After 12 Years Ahead of Season Finale.

Megan's role in Season 14 concluded with the three of them playing happily on a beach (though Megan did appear in one episode in the 15th season).

The makers have undergone a number of cast changes. Spencer is one of several actors returning to 'Grey's Anatomy' upcoming season after Ellen Pompeo, Kate Walsh, Chandra Wilson, and James Pickens Jr. were also roped in for recurring roles. On a related note, as its 17th season drew to a close, Giacomo Gianniotti, Greg Germann and Jesse Williams left the show.

'Grey's Anatomy' is the longest-running show on ABC currently.