Researchers have discovered a protein that can predict whether or not DNA-damaging treatments will be effective when it is found in high concentrations in breast cancer tumors. 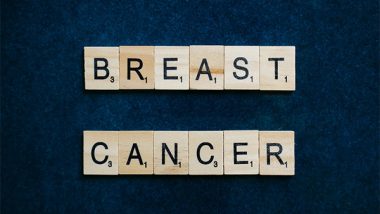 Washington, November 23: Researchers have discovered a protein that can predict whether or not DNA-damaging treatments will be effective when it is found in high concentrations in breast cancer tumors.

The findings were published in a paper titled 'Alterations in the p53 isoform ratio govern breast cancer cell fate in response to DNA damage' in the Cell Death & Disease journal. Also Read | Remdesivir Could Reduce COVID-19 Mortality If Given Early: Study.

"We looked at this particular variant of a protein called p53 because our previous studies have shown that it is present at high levels in breast cancer and is associated with cancer recurrence," she said.

"We were surprised to see that by increasing the levels of this variant of p53, the breast cancer cells became unresponsive to existing therapies. Thus, inhibiting this variant could enhance people's responses to currently used cancer treatments. We recently confirmed these findings in living subjects."

"A breast cancer that is resistant to treatment is impossible to cure. Therefore, there is an urgent need to improve therapies that target the cells responsible for resisting these therapies."

Associate Professor Kelly Avery-Kiejda, who supervises Steffens-Reinhardt on her research, says, this research could be a first step in better targeting breast cancer treatment.

"One in eight women in Australia develop breast cancer and while there is a 92 per cent survival rate, this doesn't take into account secondary cancers or metastasis, which are essentially incurable," said Associate Professor Avery-Kiejda.

"If we can identify biomarkers that predict how well a patient will respond to certain therapies, we can then target the available therapies more effectively."